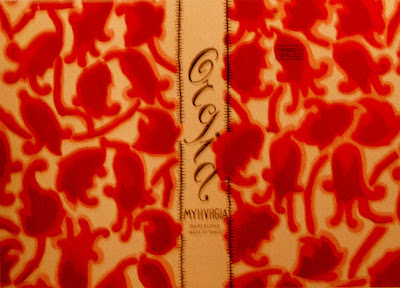 There is much more to Myrurgia than Maja soaps, though with her fan, her kiss-curls and her mantilla, the red and black Spanish dancer adorning the label has become the icon of folkloric Spain. In the wake of her scarlet ruffles, she carries all the España es Diferente clichés for which the Spanish themselves, though they threw their castagnettes in the sea after the Caudillo’s death, still have inordinate fondness…

Spain has a paradoxical relationship to its folklore since it was used by Franco both to hold the country back and to sell it to tourists in the 1960s. Despite firmly embracing modernity, it is quite possibly the sole European nation to have kept its traditional popular arts – bullfighting and flamenco – alive and thriving. The ubiquitous Maja (in Spanish, the word designates a beautiful girl of the popular classes) may very well be the mirror of this continuing, but not always reactionary, attachment to tradition.

Myrurgia’s story, as one of the three great perfume houses founded after WWI – with Parera and Dana – reflects this combination of attachment to folklore and push towards modernity. Because there’s a lot more to the Barcelona perfume house than Maja : from its birth in 1916 to the onset of the Spanish Civil War in 1936, it was linked to the Catalan and European avant-garde. The 2003 exhibition Myrurgia 1916-1939, Bellesa i Glamour at the Museu National d’Art de Catalunya bore witness to the extraordinary creativity of the company.

Myrurgia’s owner, Esteve Monegal (1888-1970), was in fact one of the rising stars of Art Nouveau in Catalunia during his brief artistic career : as a youth, he read Nietzsche and admired Wagner ; later on, he became a major player in the Barcelona art scene, as a sculptor, teacher and theoretician…

However, en 1917, at the age of 29, Esteve Monegal officially renounced his artistic career to take over the perfume house founded by his father, who owned a thriving hardware store. From then on, with the help of his fellow artist Eduard Jener Casellas, he called on the best catalan artists and photographers to design his bottles, labels and ads. Myrurgia’s visual identity closely followed the period’s aesthetic trends, from Art Nouveau to Ballets Russes Orientalism, and from Art Deco (Myrurgia had a stand at the 1925 Paris Arts Decoratifs exhibition that gave the movement its name) to Surrealism : René Magritte himself designed some of the ads. The Myrurgia factory itself, built in 1928-30 by Antoni Puig Gairalt, is considered to be one of the landmarks of Rationalist industrial architecture in Catalunia.

The Myrurgia exhibition catalogue unfortunately gives very little information on the perfumes themselves. Esteve Monegal himself, who apparently worked with François Coty before 1916, is said to have found the names and the notes : he bought his formulas from the Naef & Compagnie laboratory until 1921, when he hired Lucien Maisonier as the technical manager of his factory. We know that the great Jean Carles, of the Roure Laboratory, who worked a lot with Spanish companies (he authored Tabu and Canoë for Dana) composed some of the fragrances from 1927 onwards.

The Craze for Exotica in Interwar Years

The names and presentations of the fragrances bear witness to the craze for exotica in the society of the interwar years. Myrurgia’s first great success, and one of its longest-lasting, Maderas de Oriente (Woods of the Orient, 1918), a sandalwood, cedar and sycomore blend, reflects the Orientalist fashion launched by the Ballets Russes and Paul Poiret’s fashions, as do Hindustan (1922), Morisca (1917), or the Indian-miniature inspired box of Besame (1921).

The provocatively-named Orgia (1919) – would anyone dare to launch a fragrance with such a racy name today ? – probably echoes Esteve Monegal’s fascination with Antiquity. The very name Myrurgia was formed by a modified combination of the Greek words for «essence» and «factory».

The exhibition only covers the period preceding the Spanish Civil War,and with good cause: the country’s industry suffered both from the war and the ensuing embargo. Myrurgia survived mainly through exports to Latin America, before re-emerging in the 1960s with the tourist boom, when the Maja soaps became ubiquitous souvenirs of sunny Spain.

Today, after merging with Puig, Myrurgia mostly produces fragrances for Spanish brands like Adolfo Dominguez and Don Algodon, but only sells five of its classics : Colonia 1916 and Colonia 1916 Hierba Fresca, Maja, Joya and Embrujo de Sevilla. Of these, only the Colonia seems to have retained any sort of prestige. The rest are sold between shampoos and souvenirs in the Corte Inglès department stores. Their original formulas are a distant memory. Nevertheless, the smell of Maja soap can still conjure nostalgic recollections of fino-drenched evenings in Andalucia…

Please note that the dates given are not necessarily those of the launches, mais those of the oldest bottles or ads shown in the catalogue. Most seem earlier than the years quoted in various Websites, including Myrurgia’s. Some are given later dates because they were relaunched between the 50s and the 70s. A limited edition of Maderas de Oriente was issued for the 2003 exhibition.