Beige, the New Chanel Exclusive (Or How a Neutral Colour Can Become Indecent) 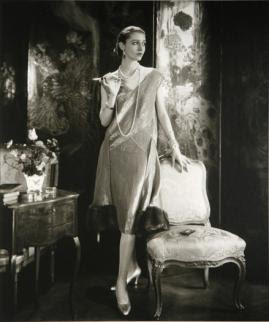 I’ve been putty in Jacques Polge’s hands ever since Chanel launched the Exclusives. Their poised, cultured, eminently French tone ; their low-key, subtle tweaks on genres and materials ; their utter refusal of flash ; the way they reference the Chanel olfactory heritage without stuttering the classics… With its wrist-licking lushness, Beige has recently joined the collection, and my list of favourites (along with 31 rue Cambon, N°18 and the Eau de Cologne).
By now, most perfumistas know that Beige was one of a series of three 1940 Chanels (along with Rouge and Bleu), meant to evoke the red, white and blue French flag, the colours of Chanel’s last collection before shutting down her couture house in 1939. Several commenters have griped about the drabness of the name : but after all, Gabrielle Chanel was the woman who dressed all women in neutrals, instantly outmoding Paul Poiret’s Orientalist colour-fest – though in fact, several of her 20s and 30s designs were quite colourful…
But if the new Beige were a colour, I would definitely see it as cream, the cream of a tight-grained skin. Its sensuousness is mature and knowing: it speaks in the confident tones of a well-bred brunette with a few drops of exotic blood, rather than the giddy, candy-pink soprano trills of Gardénia or the snow-queen assertiveness of N°22.
Beige opens with the coconutty, buttery frangipani blossom, cut through with a double, contrasting counterpoint of bitter sap and discreetly indolic honey – the latter creates the effect of sunkissed skin, the former is no doubt the freesia. Like the listed hawthorn – a licorice, almond and honey-tinged floral reminiscent of heliotrope – the freesia is a synthetic rendition (the essence of hawthorn and freesia can’t be extracted). This is probably what gives Beige the « man-made » quality Marina of Perfume-Smellin’ Things notices in her impeccable review… I think I also detect an unlisted, very Chanel ylang-ylang note, and some white musk in the base.
Beige has quite a decent amount of indecently lush sillage and is fairly tenacious, especially compared to other Exclusives (yes, Bel Respiro and 28 La Pausa, I’m looking at you). Seven hours into wearing it, it’s still wafting up and it feels as sexy as a nude breast under a cashmere teeshirt. Beige cashmere, of course.
Update, September 15th 2008: After having smelled Beige with Octavian of 1000fragrances, he attracted my attention to a muguet note, big as a house, so huge and obvious that I missed it (how could I?). It was clearly placed there to air out the more tropical accords. He also pointed out that there was sandalwood in the base. So there. Just hand me the decongestant.

Image: Marion Morehouse in a Chanel gown by Edward Steichen (1925), courtesy of the Candace Dwan Gallery.
Posted by carmencanada /Grain de Musc at 20:02