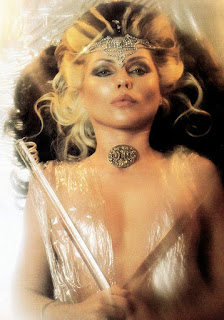 Though Tom Ford’s press material aligns fantasy notes such as black orchid, red lily and crème de marron, this summer’s Frenglish-named Orchid Soleil (clearly, “Sun Orchid” lacked that certain je-ne-sais-quoi) smells neither black, nor red, nor marron glacé. Rather delightfully, it’s as though his late, regretted Velvet Gardenia --easily the most decadent interpretation of the flower -- had been watered with Estée Lauder’s Bronze Goddess, the petals dipped in white chocolate filled with coconut cream. The distinctive green-mushroomy facets of Ford’s take on gardenia lend an intriguing naturality – almost perverse in the context – to this tropical-hothouse mutant. It also keeps the gourmandise in check, so that you’d stop short of licking an Orchid Soleil-sprayed skin, for fear of getting the kiss of death from a venomous flower. It’s a gutsy move for a mainstream product, but might come close enough to the coconutty codes of American sun products to infiltrate bathroom shelves. This is Tom Ford in top, over-the-top form.