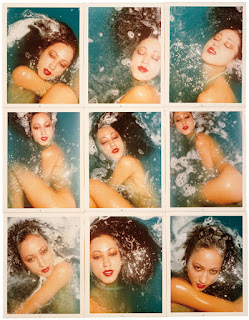 ADDED ON FRIDAY 15 JULY: I'd programmed this post ahead of time, before learning of the tragedy in Nice. I've considered taking it down, but since it's already up, I've only removed the jaunty intro... Last January after Charlie Hebdo I remember taking solace in smelling beautiful things. Hopefully it'll work this time too.

Queen of the Night (Grandiflora)
Bertrand Duchaufour invents the scent of the Night-blooming Cereus for the Australian brand Grandiflora by hooking up the animal, vegetable and mineral kingdoms through what seems like a whopping dose of indole. To conjure the spectacular desert blossom, he combines two non-creamy white flowers, orange blossom and pittosporum (the latter an accord). The made-up flower bears imaginary fruit, sticky, purple-juiced berries with a grape bubble-gum, shaken up by an incensy blast of cold desert air.

Cologne Indélébile (Frédéric Malle)
I’ve been stuck on this since I blind-smelled it for the Olfactorama Awards (it lost out to Misia by Chanel, already a winner at the French Fifis). Without the “cologne” cue to skew my perception, I entered Dominique Ropion’s composition through the green, tannic effects of narcissus before recognizing it (within three minutes: this may seem like “just” an eau de cologne, but it has a very distinctive signature). I love the virtuosic play on functional fragrance notes, including a Chernobyl-sized cloud of white musks, so much that I broke down and bought the shower gel.

Veilleur de Nuit (Serge Lutens)
It isn’t hard to imagine “Night Watchman” veer into kinky Night Porter territory as Serge Lutens teases chocolate into owning up to its bestial bent with lashes of civet, castoreum, tuberose and vetiver. But the only pain it inflicts is the price point. The rest is all yummy-dirty earthiness, mud and honey-caked fur.

Sous les Magnolias (Pierre Bourdon)
Authored by no less of a nose than the man who gave us Kouros, Cool Water and Féminité du Bois (with Christopher Sheldrake), this limpid yet vintage-vibe fragrance drove me to distraction for several days, since it smells like a long-lost Roudnitska. In fact, I did think it was a Roudnitska when I blind-smelled the blotter. Not a demented mistake: Bourdon, whose father was deputy director of Dior perfumes, did study with the great man. And I remember Frédéric Malle telling me, when he launched Eau de Magnolia, that Roudnitska had always wanted to capture the flower’s scent… To sum up: I so need to buy this.

Ma Bête (Eris Parfums)
Another ghost , Ma Bête, composed by Antoine Lie for Yesterday’s Perfumes author Barbara Herman, hinted at several blasts from the past until I realized that this was Lie’s take on the fabled Animalis base – a waxy, fatty, feral, honeyed beast lurking in Shocking and Visa (probably), as well La Nuit (Paco Rabanne: the one Luca Turin called “Tabu sprayed on a horse”), Poison, Kouros and their unnatural offspring Parfum de Peau… Like wearing a vintage fur coat with the lining ripped out.

Peau d’Ailleurs (Starck)
I shouldn’t be mentioning a scent coming out in September, but this is a) by Annick Menardo, and anything by Annick is worth sticking your shnoz into ASAP. And b) the famed French designer’s brief mentioned no notes, only words like “meteorite” and “the cosmic smell of the void”… The result: a compellingly weird, static, clean mineral dust smell, into which materializes an apricot the size of an asteroid – it just appears, as though it had tumbled out of a black hole. As Mr. Spock would say: “Fascinating”.

Ensoleille-moi (Gas)
Recently relaunched, the confidential Ensoleille-moi, composed by Mathilde Laurent after she left Guerlain, and finished by Isabelle Doyen when Mathilde was hired by Cartier, has the easy-going vibe and airy texture of something that could’ve ended up as an Aqua Allegoria.  The scent is worked around the monoï note, tiaré blossom (a gardenia-like Polynesian flower) steeped in coconut oil. What’s most surprising about it is the huge proportion of calone it contains. In fact, there’s so much of it that it becomes invisible: the scale literally changes the perception of the note, and it barely registers as an aquatic. I give myself a squirt when I remember that despite the temperature, this is actually mid-summer on the calendar, and that somewhere, in a parallel universe, I’m on the beach.

Géranium Équipage (Hermès)
I discovered this when I blind-smelled it for the Olfactorama Awards, and voted for it as Best Masculine without a second thought. On paper, spices shouldn’t work in summer, but given the minty-metallic splash of geranium Jean-Claude Ellena added to Guy Robert’s 1970 classic, the clove-and-cinnamon burn turns cool. Ellena’s elegance shines through those breezy, jazzy reworkings – perhaps having something to start from turns the creative process into more of a game. It makes me hope we haven’t smelled the last of JCE.

Must Gold (Cartier)
Again – sounding like a scratched record, am I? – I rediscovered this one in an anonymous decant sent out for the Olfactorama Awards (it won Best Feminine in a tie with Narciso). First sniff. Brain lit up. “Yay, galbanum”, it said. A funky jasmine comes out in the second blast, pushed forward by (bra cups filled with?) a powder-puff of vanilla and musk. A thoroughly enjoyable variation on the original olfactory oxymoron created by Alberto Morillas: the green Oriental.

Terracotta Le Parfum (Guerlain)
This was in my 2014 and 2015 summer lists, but we all need that one perfume that means “if I’m smelling this, it must be summer”. The matching sunscreen and moisturizer are my default settings for the few days a year I spend near a pool.

The above illustration is of Pat Cleveland by Antonio Lopez.