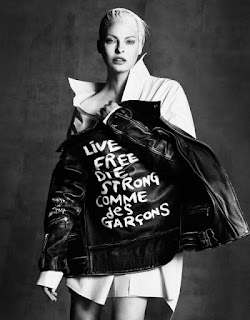 In the early, day-glo 80s, Rei Kawakubo turned black into the color of female empowerment, much like Chanel had sixty years before her. Though their approach was profoundly different, the former could have embraced the latter’s motto, “Elegance is refusal”: in the aptly-named Comme des Garçons, it was the refusal of the standardized codes of femininity; the search for the beauty of the misshapen, the rejected, the odd. (Wearing CdG-inspired garb in the aerobic 80s earned me as many sneers and jibes as my punk get-ups during the disco era.)

Since then, black has become the default setting of the fashion and beauty world, and one of the most common epithets in fragrance. Translating black into scent, however, remains just as subversive an experiment, and one that Kawakubo has often asked Christian Astuguevieille, the creative director of Comme des Garçons Parfums to carry out. The brand’s first, eponymous eau de parfum sprang from a brief that envisioned diving in a pool of ink-black water; its groundbreaking Incense series explored the combustible resin in nuances of soot, spices and smoke. Black from the Play trilogy used soot-on-metal oxides to conjure the color. The later, award-winning Black aligned olfactory synonyms for “charred”.

After the brand’s most recent launches – Dot’s osmanthus in an ice storm and the purring rose held by Grace Coddington’s kawaii kitty-shaped bottle – Blackpepper comes off as both an Anti-Dot (as in “antimatter”), and an altogether more feral beast, all fiery tooth and claw and black fur. It’s more figurative than Play Black or Black, in that the eponymous spice is immediately and unrelentingly recognizable. And no wonder, since Antoine Maisondieu injected a nose-searing 20% of it in the formula.  Yet this shot of peppercorns punching black holes in the air (and our olfactory epithelium) -- a reminiscence of the infamous “Comme des Garçons lace” produced by knitting machines induced to go awry – is also a deconstruction of the note. (In this, again, the scent echoes Kawakubo’s approach to fashion.)

In the 90s, Serge Lutens created a palette of eyeshadows for Shiseido that was a set of four different blacks. Blackpepper, like its tinted bottle -- just on the edge of blue in certain lights, its mirrored glaze catching glints of surrounding colors – is also an essay on the variegations of its namesake color; a marquetry of faux noirs ranging from the dark-chocolate smoothness of tonka to the matte amber of clary sage, by way of flint, dust, leather and tar.  And the methodical refutation of everything La Petite Robe Noire stands for.