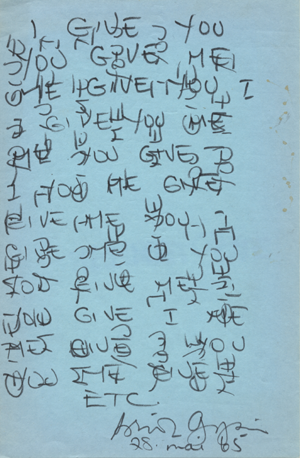 When my editor asked me whether once it was finished, Séville à l’aube would bring me back to the night that inspired it, I said no. It would not bring back the past. It was the future memory of what I was living as I was developing it with Bertrand Duchaufour. It turns out this was not the memory Séville à l’aube was meant to catch in its wake.

A few weeks ago, the Spaniard in the story that inspired the scent, the one I called Roman, got in touch with me after having disappeared from my life for fifteen years. He wasn’t aware there was a perfume or a book, since it wasn’t translated into Spanish. I sent him both. Then I followed the parcel.

I wore Séville à l’aube for him. He called it “our” perfume.

Now Séville à l’aube smells of arriving at the airport at midnight, seven hours late after a missed connection, scared that seeing each other after so long we wouldn’t connect, and then laughing and kissing. It smells of listening to Mozart and Bizet with the shades drawn. It smells of hours and hours of storytelling – catching up on all those years we lived without knowing of each other’s adventures, and on the years we never told each other about when we crossed paths. It smells of lives bound to be lived apart, and of a bond that was never really broken; of two strangers, two wanderers who recognized each other as kindred souls.

It smells of duende: the moment of losing yourself to beauty, always already knowing you will lose the moment, fall from beauty.

As we kissed goodbye at the airport, he buried his nose in my neck, and said that of all his women friends, I was the one who smelled the best.