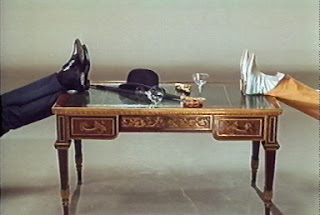 Most mainstream feminines were still flowers stuck onto wood with caramel and/or jam.
Every second flanker was called “Eau”.
Niche broke down and made its first ad film (L’Artisan, for Explosions d’émotions).
Chanel and Hermès announced the appointments of their future in-house perfumers (Olivier Polge and Christine Nagel, respectively).
One fragrance was named after a medieval torture instrument and another after aninsulating material (Serge Lutens, because of course he would).
Another required pee to be added as an ingredient (O’Driu Peety).
A group of young French bloggers/aficionados manned up and instead of whining about the Fifis, they set up awards of their own, “Olfactorama” (attended by Mathilde Laurent and Thierry Wasser, no less).
And in Coty’s old château, now an otherwise impeccable, beautiful hotel, some bug stung my tush (probably Coty’s ghost).

2013 was also the year Sandrine Videault left us at a scandalously young age. I will soon be writing about what will have been her last commercialized fragrance, Grandiflora Magnolia Sandrine, and the Magnolia Michel composed by Michel Roudnitska.

Meanwhile, here’s my contribution to our annual best-of roundup…

Guerlain: the renovated flagship store and the restored extraits
The Guerlain flagship store on the Champs-Élysées reopened last month. From the downstairs restaurant helmed by chef Guy Martin to the top-floor spa, now as softly white as feathers plucked from a cherub’s wings, you could just spend a day there feeling you’d died and gone to sweet-smelling heaven. But the fragrance consultation room is where I found the French perfume bloggers hunkered down, assessing the current state of the classics in the extrait.
Our verdict: we are very happy indeed with Thierry Wasser’s restorations, especially Mitsouko (no need to hoard the vintage stuff anymore) and Chamade. It’s been years since I’ve smelled it so good – apparently it’s to do with the new grade of galbanum. The top notes crackle like Pop Rocks caught in a spring-green resin, alive as though it were 1969 all over again.

Hermès Eau de Narcisse Bleu
I fell in love with its tannic raspiness at first spray. A breeze of tea, hay and blossoms, with a distant whiff of horsiness: it just feels right. Review is right here.

Le Labo Ylang 49
Monsieur loved it so much on me he went and bought me a bottle – the first time I’ve received perfume from a man, as opposed to a company, in the past five years.
When I reviewed it first, I got a stripped-down 70s-style green chypre with an interesting saline vibe. Then one evening as I was wearing it, I started thinking of roses before realizing that the scent wasn’t just inside my head, but on my skin: I’d managed to completely miss the note… There is indeed a massive rose bush planted in that vetiver underbrush.

Aedes de Venustas Iris Nazarena
Like leather and vetiver, somehow one can’t ever get enough iris and incense. Aedes de Venustas is shaping up as one of the most interesting new niche houses, with a very deft handling of visuals – the Nazareth iris that served as a muse looks good enough to be framed on a wall, and the gray velvet box is beautiful enough to display.

Thierry Mugler Alien Liqueur de Parfum
Aged in a toasted oak cask like rum, Alien takes on deeper, woody ambery tones with an added almondy aroma. Of its three building blocks – jasmine sambac, ambroxan and cashmeran, all in overdose --, the latter is pushed forward. Its unique musky-ambery-woody, velvety texture, slightly dusted with the musty part of patchouli, takes the hysterically oversized floral note down a notch. If you thought Alien was over-the-top, this limited edition might be the one for you.

Lolita Lempicka Elle l’aime
Along with Angel, the original Lolita Lempicka kickstarted the gourmand trend. Will Elle l’aime’s white-flower/coconut chimera trigger a rush for tropical? Kudos to LL, Christine Nagel and Serge Majoullier for introducing an original, yet easy-to-embrace note. If I’ve got to pick a 2013 mainstream in a year full of flankers, that’s got to be the one.

Fragrance Republic
If you’ve ever wondered what perfumers can come up with when they’re given a free rein – and of course you have --, Fragrance Republic has the answer. This nose-to-nose initiative is more of a club than a brand: the idea is to enable fragrance lovers to receive a 15ml bottle of a non-commercialized fragrance perfumers worked on for their own pleasure. Right now, I’m enjoying Nathalie Feisthauer’s FR! 01 N°01 lovely pear, iris and musk fragrance – the author of Putain des Palaces really knows how to throw some curves into a fragrance.

The Jean Patou revival
Bruno Cottard and Thomas Fontaine are busy resurrecting what had become, through no fault of the previous in-house perfumer – the adorable, gifted Jean-Michel Duriez – a zombie brand. The value-added core accords are now made in Cabris by Accords & Parfums (Art & Parfum’s sister company), with beautiful materials. Fontaine has done a fabulous job in restoring the classics: the re-launch “Ma Collection” is one of the best news of the year.

The N°5 Culture Chanel exhibition at the Palais de Tokyo, Paris
There’s probably no other perfume you could do this with – sorry Miss Dior, the avant-garde aura just doesn’t suit your style. And admittedly, last May’sexhibition didn’t emphasize the olfactory as much as perfume lovers would have hoped. But in treating N°5 as the crucible of Chanel, curator Jean-Louis Froment – a man with impeccable credentials in the contemporary art world – demonstrated Gabrielle Chanel’s stature as an artist funneling and interpreting aesthetic influences through the filter of her life. Next best thing: get the catalogue, it’s magnificent.

I wish you all a happy, gorgeously fragrant New Year.