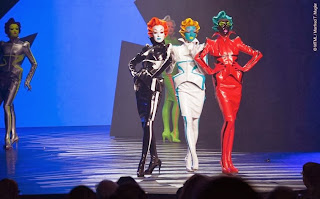 Back in 2007, the people at Thierry Mugler came up with the frankly brilliant idea of aging fragrance like you would a fine cognac, in an oak cask. Logical: the part of cognac that evaporates into the air as it ages, its sillage, as it were, is called the “angel’s share”. After Angel La Part des Anges. The patented process was extended to Alien and A*Men in 2009. The brand continued to experiment, teasing out another strand of Angel’s DNA to add foody notes to their scents (“Le goût du parfum” in 2011), then macerating leather in them (“Pure leather” in 2012) and lightening them up with floral waters (last summer’s “Aquachic”).

In this winter’s limited editions, Mugler perfumes are back on the boozy track, with a twist: the casks built by Séguin Moreau are made with toasted wood, the press material specifies. (Actually, the inside of wine and spirits casks is always heated.  Several factors impact the type of aromas developed, including the intensity of the heat. For instance, stronger heat will produce more roasted, toasted, toffee aromas, along with vanillic and smoky notes.)

I’ve tested the new Alien Liqueur de Parfum 2013.  Out of Mugler’s three feminines, it’s the only one I’ll consider letting near my skin, though the first time I applied it, it lived up to its name by popping out of my arm and biting the face off any other juice I applied for the three following days.

The 2005 scent was developed by fragrance consultant Pierre Aulas with Dominique Ropion and Laurent Bruyère, based on what Aulas has dubbed the “poly-block” structure. “When I worked on Alien”, he explains, “I tried to understand the olfactory specificity of Angel, which was outrageous, overdosed. So obviously, we had to apply that. With Alien, for the first time cashmeran and ambroxan were overdosed in a feminine, and what turned it into a feminine was this classical jasmine-orange blossom white floral accord that softened it.”

Even though it is considered the tamer composition of the Mugler portfolio, like its predecessor Angel and successor Womanity, Alien goes against the grain. Operatic grandeur where mainstream offers for women aim for sweet, innocuous girlishness. Feminine and masculine notes boosted to Godzilla proportions, a precision-assembled hermaphroditic form as opposed the gender specialization of most contemporary juices. A super-expensive formula – Pierre Aulas claims that no one can copy it at current price-per-kilo budgets – that matches overdoses of naturals and overt synthetics, where most brands boast naturals that were practically only waved over the vats. The Liqueur de Parfum series adds a deliciously subversive twist by treating the mutant blend as though it were the noblest product of the French terroir.

Given my previous experience, my first application of Alien Liqueur de Parfum 2013 was uncharacteristically sparing – I was having dinner with human beings, not with Ripley. In fact, boozing up Alien mellows it down. The radioactive floral accord is partly soaked up by the ambery-woody notes, with the slightly dusty effect that gives cashmeran its velvety touch pushed forward. There is a bit of an added vanilla-toasted almond sweetness, but the gourmand facet is kept in check. Though it’s still got the half-life of plutonium on skin, its sillage is no longer hazmat-grade.

Enjoy, and a very merry Christmas to those who celebrate it!