Lancôme La Vie est Belle: Life is beautiful, a message brought to you by L'Oréal 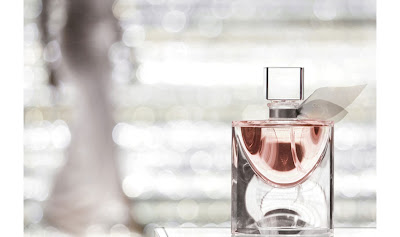 Does any decision-maker in the big perfume brands know how to choose? How do you choose, how can you even smell when just about every perfumer in Paris thrusts submissions under your nose for a couple of years? If a product takes 5521 mods to be done, are we thinking “painstaking perfectionism” or “jitters”? Are 5521 mods really something to brag about? Apparently they are, since the Lancôme press material for La Vie est Belle does.

You start suspecting something is amiss when a brand backs its new perfume up with a press kit containing a potted history of women since the 70s, several claims that this fragrance is about “less is better”, “being over appearance”, “the simplicity of truth, of sincerity”, and philosophical statements written by a thinking woman’s piece of beefcake named Vincent Cespedès, author of a best-selling “man explained to women” treatise. Happiness, Cespedès decrees in a message brought to you by L’Oréal, is a “radical philosophical choice” for today’s women. And apparently, La Vie est Belle is the magic pink-tinted potion that’ll enable them to make it. After 5521 attempts, no doubt.

The new Lancôme, set to be one of the biggest launches of the season, is signed by no less than three brilliant IFF perfumers, Olivier Polge, Dominique Ropion and Anne Flipo. The first, Cosmétique Mag informs us, perfected the iris note. The second worked on the jasmine sambac and orange blossom heart. The third added the praline, vanilla, tonka, blackcurrant and pear gourmand base. No one takes credit for the patchouli, which must have snuck in of its own accord.

La Vie est Belle has a whopper of a sillage and sticks on skin like caramel on a molar, possibly a tribute to Dominique Ropion’s peerless skills: he couldn’t do fleeting if he tried.  It is introduced as “the first iris gourmand”, conveniently forgetting that Thierry Wasser’s Iris Ganache for Guerlain got there first. The spare-no-expenses iris accord contains actual orris concrete (possibly a thimble of it was waved over the production chain?). But where Olivier Polge’s Dior Homme (the original, not the LVMH rewrite) elegantly exploited the chocolate facets naturally present at certain stages of the maturation of orris butter, this iris dives straight into the praline vat, dragging the floral accord along with it.

The result, an offspring of Angel and Dior Homme, feels oddly sullen – no wonder as a result of being tugged between its over-the-top maman, its too-cool-for-school papa, and trying to pull off la zia Infusion d’Iris’s classy act while longing all the time to join cousin Coco Mademoiselle in some girly hijinks. I’d sulk too, even if I could borrow Julia Roberts’ dazzling smile to go out into the world. C’est la vie.