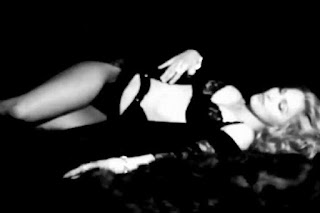 I haven't smelled Truth or Dare yet since it hasn't been launched in France. But I can think of at least four good reasons to own a bottle. And only one of them is tuberose.

First, because Madonna always interested me for her systematic exploration of mythical female personas -- “she who is blessed among all women” turning herself deliberately into all women. This, to me, is epitome of post-modern femininity and post-feminism: an exercise in sampling, slipping on masks you believe in just enough to take pleasure rather than allowing them to define your identity.

Given the star's lability, it's not much of a coincidence that some of the identities she's taken on have crossed paths with some of mine (and millions of other women, I should imagine). Though sometimes it's gone a bit further than that (let's just say the bullfighter in her Take a Bow video was a bit more to me than an acquaintance). Learning she was a tuberose aficionada didn't surprise me in the least. And then, I found we had another little thing in common when I read Katie Puckrik’s interview of Stephen Nielsen, the perfumer who composed Truth or Dare, in the Guardian.

Madonna was adamant that she did not want musk in Truth Or Dare's formula. "I tried to explain to her that it needed musk to round the edges, like you sand and seal a stippled wall," Nilsen remembered. In the end, he took a chance and went ahead with a version that included the much-needed musk. When he nervously presented it to Madonna, he said she smelled it sceptically, then grudgingly conceded, "OK – you were right. Leave in the musk." (Excerpt from “Madonna's perfumer suggests the popstar remains a hard towoman to please”, by Katie Puckrik, The Guardian)

I think I know how she felt. You see, I went through a rather similar episode during the development of Séville à l’aube. I wanted Bertrand Duchaufour to take it easy on the musk. He stuck some in anyway, and proved to me we needed it. Which only goes to show that whether you're a diva or just some obscure scribbler, you've got to listen to the perfumer.

Another reason to love Madonna? As most of you must be aware by now, when informed of regulations by Stephen Nilsen, she uttered the perfume lover's favourite anathema: "Fuck IFRA!"