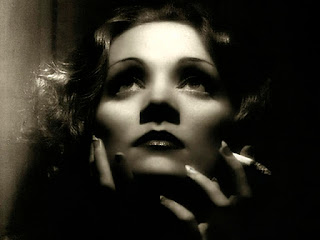 Five years into an acquaintance we struck up around a sealed bottle of Iris Gris, my friend Octavian Coifan became a “character” in The Perfume Lover, something he recently wrote about on 1000fragrances. On Easter Sunday, he gave me the perfume he had composed as a fragrant translation of the journey into white flowers we take together in Chapter 18 (to read the post, click here). It’s called Shanghai Lily.

Despite its name, this heady, spicy blend on a suavely animalic base is not a tribute to the lily, but to one of my favourite film heroines – how has he guessed? – the adventuress played by Marlene Dietrich in Josef von Sternberg’s surprisingly feminist Shanghai Express (1932). And the first thing I said before I even took out the stopper was Marlene’s line when she comes across her former fiancé:
“It took more than one man to change my name to Shanghai Lily.”

Here’s the transcript of the scene from the screenplay by Jules Furthman, who also wrote the scripts of two other of my cult movies – both featuring dames who are no better than they have to be, which is very good indeed --, To Have and have not and The Big Sleep.

Madeline was actually Marlene Dietrich’s given name – Maria Magdalene. It is also, of course, the name of the patron saint of perfumers. The worst was always thought of Mary Magdalene, the beloved disciple of Christ who was made out to be a whore, albeit a repentant one, by the Fathers of the Church. The worst is what the passengers of the Shanghai Express think of the “notorious White Flower of China”, who dispenses her sultry fragrance and favours lavishly…

Like white flowers, women of easy virtue intoxicate as much as they shock. The paragons of puritan self-righteousness aboard the Shanghai Express forgot that virtue wasn’t necessarily predicated on the ability to hold a penny between one’s knees when men are around: in its original sense, it meant “worth” and “bravery”, something Marlene’s Lily/Madeline had in spades. And when she did reunite with the man she loved, she did it on her own, sovereign terms, not because she repented her evil ways and turned into a blushing English rose… The Hayes Code hadn’t yet picked up steam in 1932, and leading ladies who’d known more than one man weren’t compelled to die in the end.

I couldn’t imagine a better name than Shanghai Lily for a fragrance composed for a latter-day, unrepentant Magdalene. It is a touching gift and an intoxicating scent. In his post, Octavian explains why the day-blooming roses must perpetually renew themselves in perfumery while night-blooming white flowers are eternal… He knows I’ve never been much about roses. And he’s guessed why. Perfume is the poison of the soul…
Posted by carmencanada /Grain de Musc at 10:00