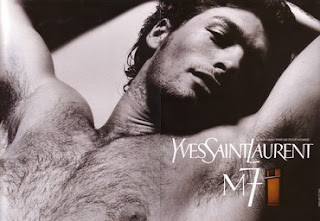 As you must all know by now, instead of going the “exclusives” route like Armani, Hermès or Chanel, L’Oréal has chosen to round up half a century of sleepers in Yves Saint Laurent opus for “La Collection”.  The limited-edition In Love Again and the discontinued Nu have been raised from limbo; Y, Yvresse, Yves Saint Laurent pour Homme, Rive Gauche pour Homme, Jazz and M7 have been given a new lease on life.  I’ve heard a fair amount of grumbling about the new bottles, two piled-up cubes in beige for the ladies and black for the gents. I quite like their unfussy, 70s-minimalist aesthetics. Much more grumbling about reformulations should be expected but then, it’s not like the stuff hasn’t been reformulated yet, even in the old bottles. Practically anything that’s over three years old has.
M7 Oud Absolu is the only juice of the bunch that’s been renamed and therefore, can be expected to have noticeably changed. It was Yves Saint Laurent under Tom Ford’s tenure that initiated the black gold rush on oud in 2002[1], and you can’t blame the brand for wanting to get the point across. I don’t quite remember whether there was much fuss about oud at the time: if memory serves, the ad was the first to feature full-frontal male nudity, and the model’s dangly bits stole the thunder.
I never wore Jacques Cavallier and Alberto Morillas’s original M7 though I sure smelled it a lot in Beirut where it was apparently a big hit, so I’ll leave it up to those of my blogger colleagues who did to do the side-by-side. But I’ve given M7 Oud Absolu a few skin-spins. Despite what its name lets on, it’s not a Montale-type oud-on-steroids. Being hyperosmic to the Karanal-type, woody-ambery materials I’ve nicknamed “spiky woods” because they make me feel as though I’d had Velcro shoved up my nose, I can detect the barest molecule of the stuff, and there’s very little of it, if any, in the new M7.
Boosted by mandarin, the medicinal/sweet facets of myrrh give off their characteristic Coca-cola accord, with a lash of cherry-flavoured cough syrup which is not entirely un-reminiscent of Serge Lutens’ Boxeuses. A caramelized effect conjures the smoke of burned oud chips (which have none of the animalic growl of oud oil). There’s something of an ink note that hints at a castoreum reconstitution (oud oil and castoreum have common facets), and might be what the press release calls M7 Oud Absolu’s “mineral freshness” – there may just be a hint of aldehydes perceptible in the top notes as well, and a fairly indolic jasmine note to bolster the raindrops-on-hot-tarmac effect.
The oud oil note comes out more distinctly a couple of hours into the development: what’s stressed is the “oil” part – at this stage, and far into the drydown, M7 Oud Absolu smells mostly of well-lubricated, butched-up cuir de Russie type. When it reaches that stage it is more diffusive than in the top notes, and that’s pretty much where it stays for hours, anchored by a dark amber-patchouli base.
The scent is extremely smooth and, despite its masculine target, not impossible to wear for a woman who likes her scents as pitch-black as her ristretissimo coffee.
[1] The oud-mad Montale was founded in 2001 but, being a pioneer of the French-Oriental genre, doesn’t quite count as mainstream. Sequoia from the Comme des Garçons Series 2: Red, out in 2001, is actually the first Western fragrance with an oud note, though it was based on the smell of oud smoke rather than the oil.
Posted by carmencanada /Grain de Musc at 20:27