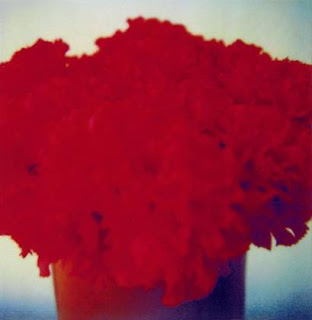 "She wanted this red for the flush of emotion, the lusciousness of lips being licked (strawberry
flesh), the carnation in his buttonhole"

When a perfume is conceived outside a brief, you can suppose its PR presentation is a truer than usual reflection of the perfumer’s intention. The pitch that goes with Cartier’s new Heure de Parfum, II - L’Heure Convoitée, i.e. “The Coveted Hour”, depicts a scene out of an elegant burlesque show from the point of view of the dancer.And it's hot under those spotlights.
In her Heures, Mathilde Laurent has often treated her olfactive themes as fractals, in other words by exploding them through various materials and accords: citrus/green for the Brillante, berries for the Folle, smoke for the Treizième. For the Convoitée, she shifts her focus to a color: red.
Red: strawberry, rose, carnation, lipstick, velvet (whose texture is translated by powdery iris and musk).
Red: fire.
Red: lust.
Besides their rubescence, what do strawberries and carnations have in common? In French “fraise” (i.e. strawberry) is also a Tudor ruff, setting off the head of grandees like the strawberry’s little jagged green “collar” sets off the red-fleshed fruit. Its stiff, crimped pleats might conjure the pinked burst of carnation petals (analogy, whether verbal, visual or olfactory, is the subconscious language of perfumery).
In French, “fraise” also designates the tips of the breasts – another coveted delicacy, and another likely association given the perfume’s strip-teasing theme. The note is rendered as strawberry flesh, tart and sweet, underlined like the fruit with a dash of green. Then the carnation takes over, as red as a brothel lantern or a spanked bottom, and never leaves center stage until the curtain falls.
Cartier’s Heures are often re-readings of the history of perfumery. After an indirect tribute to L’Eau Sauvage with the Fougueuse, to Mûre et Musc with the Folle, to Guerlain orientalism (swapping vanilla pods for chocolate beans) with the Défendue, it is towards Caron that the Convoitée seems to turn, and more specifically the clove-laden Poivre and its eau de toilette version Coup de Fouet, “the lash of the whip”.
Under a cosmetic veil of rose-scented lipstick and iris/musk, Mathilde Laurent wields her carnation like a lethal weapon, a swans-down powder puff dipped in spices fiery enough to set off the powder keg. This is, in a way, the opposite of her recent Baiser Volé, which hides its relentless volume and lasting power behind its lily-white tenderness. L’Heure Convoitée, inspired by the soulful Left Bank torch singer Juliette Gréco’s sexy “Déshabillez-moi” (“Undress Me”), brazenly bares its raw firepower.
Some like it hot.
Photograph by Cy Twombly
Posted by carmencanada /Grain de Musc at 22:46