Myrrhiad by Pierre Guillaume for Huitième Art: Tears for Adonis 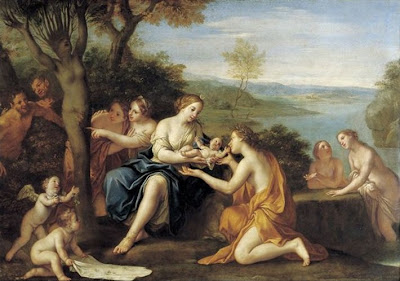 In coining a portmanteau word to christen the ninth fragrance of his Huitième Art collection, Pierre Guillaume has operated within the poetic logic of perfume. Aromatic materials literally are olfactory portmanteau words, conjuring through their facets objects that exist separately in the real world (for instance, vetiver: smoke, grapefruit, flint, wood, etc.) and splicing them together. In Lautréamont’s words: “the chance meeting on a dissecting-table of a sewing-machine and an umbrella”. The perfumer’s mind is the dissecting table where these things are teased apart and reconnected in different proportions: like the poet, his work is not to represent reality but to operate on the physical reality of his materials (the “smell-words”), as well as on the many cultural connotations they have accrued throughout the centuries (the verbal words).
So, given:
1/ Myriad, from the Greek muriades, “ten thousand” or “a very great number”;
2/ Myrrh, from the Latin murra/myrrha, itself borrowed from the Greek, possibly originating from the root mrr, “to be bitter”, attested in all ancient Semitic languages.
One of the oldest aromatic materials used by mankind, myrrh carries a myriad of stories in its wake.  For instance: the Greek myth of Myrrha, the princess who incestuously conceived Adonis with her father and was transformed into a myrrh tree, whose split bark gave birth to the young god. Or the Gospels, where it appears at the birth of Jesus, as a gift borne by one of the three Wise Men, and again after his death, when it is brought to the sepulcher by Mary Magdalene – the patron saint of perfumers – to embalm him. Myrrh is as bitter as tears.
Myrrh was also burnt, like incense, as an offering to the gods, and like incense, its mythical essence is related to combustion. According to Pliny the Elder, both resins were harvested in Arabia when Sirius was rising, i.e. at the time when the sun was hottest. They were therefore thought to be the earthly substances most in affinity with the Sun and, being the least humid, the closest matter could come to incorruptibility (to know more, read Marcelle Détienne's The Gardens of Adonis).
It is this fiery nature of myrrh that Guillaume addresses in Myrrhiad. Where La Myrrhe (Serge Lutens) brightens it with aldehydes and Myrrhe Ardente (Annick Goutal) stresses its balsamic aspects, Myrrhiad bends it towards the alchemical operation of calcinatio.
The smoky/burnt note that binds its different materials could actually be thought of as the overlap between the bitter (mrr) and the sweet (caramel). Which, of course, falls smack into Pierre Guillaume’s favorite register (perfume, when it is not an entirely marketing-driven product, is what occurs at the point of intersection between what the materials say and what they say to the perfumer).
Guillaume teases out the different facets of myrrh by setting it in materials that both connect with myrrh: vanilla (balsamic, medicinal, woody), and licorice (balsamic, coumarinic/almondy, woody, burnt sugar, anisic). He then adds a further, original twist with black tea absolute, and it is this twist that conjures the oldest memories of myrrh… The smokiness in black tea alludes to the smoke of burnt offerings. Its burnt/tarry facet works with the darker facets of vanilla and the burnt effect of licorice to draw the fragrance towards leather and therefore, towards the use of myrrh in embalmment – embalmed skin is, to a certain extent, tanned (I am indebted to Octavian Coifan’s numerous posts on the matter for this insight).
Thankfully, this funereal connotation remains well within the subtext of the fragrance. For the wearer, Myrrhiad is a hypnotically sweet, dark potion with an affinity for warm, living skin: it feels as though it were exuded through the pores rather than sprayed on. Its sillage is a little subdued, oddly for such potent notes at a 15% concentration; it is long-lasting but fairly simple in its evolution. As it fades quietly, it pivots from a more predominant licorice effect to a more distinctly myrrh-like drydown: myrrh’s mossy/mushroomy facets never develop, at least on my skin. Throughout, it stays in that sweet spot Pierre Guillaume seems most draw to, at the edge of edibility, but never crosses over into the gourmand.
Perhaps it was only a matter of time before the handsome perfumer turned his attention to the mother of Adonis: he’s done her proud.
Myrrhiad will be launched in October.
Illustration: "The Birth of Adonis" by Marcantonio Franceschini, c.1685-90,Staatliche Kunstsammlungen, Dresden
Posted by carmencanada /Grain de Musc at 20:16