Singing in the Night for Serge Lutens, Saturday October 1st on France Inter 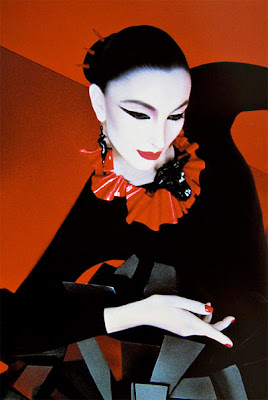 Remember last November, when I attended the wedding of Nuit de Tubéreuse and Fantastic Man, the young couple I contributed in my own, serendipitous way to match up? Well, because this is Perfumeland and the wonders never stop, an adorable, talented, funny and handsome young man I met at that wedding has just emailed me about a new radio show on the French station France Inter.
Each week, Gurwann Tran Van Gie invents the musical character of the “artist you’re better off not knowing” for “Chantons sous la Nuit” (“Singing under the Night”), the show hosted by Arthur Dreyfus, his creative partner in the PCPA (“Petit chéri, petit amour”) tandem.
This time, Gurwann will be the singer-songwriter Vert Solitaire (a pun on “ver solitaire”, tapeworm meaning “the solitary green), who will waft a vetiver-inspired tune for none other than Serge Lutens.
During the show, Mr. Lutens will share his favourite musical memories, which should make for a fascinating selection as he’s never really spoken about them…
"Chantons Sous la Nuit", on France Inter, Saturday October 1st from 10 to 11 P.M. Paris time.
You will be able to download the podcast by following this link.
Posted by carmencanada /Grain de Musc at 21:46