Yves Saint Laurent Saharienne: How not to mine a brand's DNA 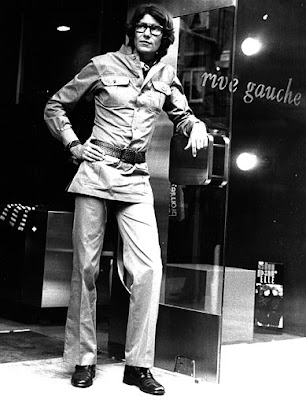 Ever since Karl Lagerfeld resurrected the zombie house of Chanel in 1983 by systematically exploiting the emblems of Chanelitude, fashion houses have been scrambling to apply the lesson to their own brands: luxury as post-modern combination of sampling and semiotics.
Arguably, the process had already been going on at Yves Saint Laurent for quite some time before the ailing couturier’s retirement, as his team heroically maintained his standards by drawing on the language he had invented (there is a fine line between reworking one’s own ideas and recycling them; between self-awareness and self-parody).
In a way, you could say that Yves Saint Laurent had already, symbolically turned his back on his years as fashion’s enfant terrible when he launched a fragrance called Paris, based on the romantic-nostalgic rose, whose face was Lucy de la Falaise (a second-generation Saint Laurent muse) posing with a straw boater in front of the most iconic of Parisian monuments. It was as though Saint Laurent has ratified his own status as a historical monument; erected his own cenotaph. Nevertheless, Paris and Champagne/Yvresse were fragrances with as strong a character as Rive Gauche and Opium, and however fragile the couturier was, his line of perfumes expressed a robust vision. Someone, at Sanofi (then owner of the licence) clearly knew how to smell (but then, 1993, when Champagne/Yvresse was launched, is practically prehistory in the perfume industry).
Today, while Stefano Pilati “revisits the codes” for YSL Rive Gauche, YSL Beauté, owned by L’Oréal since 2008, is applying the cosmetics behemoth’s steamrolling marketing strategies to a brand whose turnover it aims to double in the next five years, namely by re-launching its skincare line (something L’Oréal has peerless expertise in) with a strong focus on Asian markets.
Clearly, but not unsurprisingly, L’Oréal’s major push has been on advertising rather than on the juices. Of the last three feminine launches, Parisienne (which did well) and Belle d’Opium (which apparently didn’t) both capitalized on the brand’s two strongest “franchises” with lavish campaigns. Pity all the life has been sucked out of the juices.
Now, with last summer’s Saharienne, YSL Parfums tries to pull a Lagerfeld by naming a scent after one of the mainstays of the Saint Laurent canon, the safari jacket he introduced in 1968, making it the first “legacy exploitation” fragrance of the house with no olfactory point of reference.
The ad’s model sports the wild mane and sooty eyes of Veruschka von Lehndorff in Franco Rubartelli’s iconic Vogue photograph, though thankfully not the actual jacket, which would have been overkill. But that’s as far as any relationship between the fragrance and the name goes.
Who, at L’Oréal, imagined that this soapy-clean, hairspray-on-citrus accord could have anything to do with the Sahara, or a desert of any description, or, for that matter, with any Yves Saint Laurent perfume? It might as well have been composed for Armani (Renaud de Lesquen, the president of YSL Beauté transferred over from there). Perhaps it was: at L’Oréal, scent submissions are put in a basket from which any brand can retrieve them. And perhaps it did start out in the lab as a genuinely interesting, “burning” variation on cologne: as it is, the juice is so fleeting it couldn’t raise a blister, or even a blush.
Who, in the corporate offices, still knows how to smell, and trusts his/her judgment enough, to deliver drama in scent rather that relying exclusively on gorgeous ads and exciting new faces to front the product? Mining a brand’s DNA can be a sterile exercise if there is no vision to make its genetic code evolve.
Posted by carmencanada /Grain de Musc at 19:57