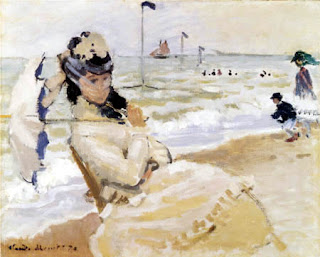 Is the president of the Osmothèque the first perfumer to have a go at legislators and industry regulators in a press release for a new product? Patricia de Nicolaï’s Week-end à Deauville, formerly a limited edition and now part of the permanent line-up[i], is a green floral built upon what is essentially an endangered species, at least in perfumery: the lily of the valley, “at least what is left of it”, she writes, “because lily of the valley, from which no natural essence can be extracted, is sorely tested in the production of scents. Not a day passes but legislation limits still further the molecules that can be used to recreate it. It’s goodbye to lilial, lyral, hydroxycitronellal and sweet bell-flowers!” (Bear in mind that these materials can still be used, but in restricted quantities).

Like its namesake town, a Belle Époque resort in Normandy and a favourite getaway for Parisians, Week-end à Deauville is a brisk, well-bred scent, romantic in a galloping-on-the-beach rather than gambling-at-the-casino kind of way. After a sparklingly cool herbal opening of cardamom, basil, peppermint and tarragon tarted up with green apple, it plays on the lily of the valley’s cool, wet facets – a reminder that before aquatic notes became available to perfumers, muguet was a way to conjure aqueous freshness. Patricia de Nicolaï does, actually, use two aquatic molecules, helional with its moist green hay facets, and the infamous calone, which conjure the dampness of the cream-soaked, countryside-meets-ocean Normand coast…
Week-end à Deauville evolves in a classic pyramid structure, its floral heart – built around jasmine and ylang-ylang – picking up the herbal greenness of the top notes with the deeper, earthy/resinous galbanum. But over the hours, the sweet and innocent lily of the valley takes on the aristocratic swagger of a chypre, with hints of leather and oakmoss in its cedar and musk base notes. Though much less ambery than Le Temps d’une Fête, also built on a green/floral/woody axis, there is a similar vibe: the poise of a well-cut chypre. Deauville is a horsy town, with two hippodromes, a polo club and internationally prestigious yearling sales, and some of that seeps into the hay and leathers notes of the fragrance.
It is in the drydown that Week-end à Deauville plays its trump card, and it is the queen of hearts: if not the tuberose (not listed in the notes), a tuberose effect conjured by the jasmine and peppermint? (after verifying with Mme de Nicolaï, it is indeed an effect, there is no tuberose in the formula.)
In Week-end à Deauville, the perfumer seems to be paying an indirect tribute to Edmond Roudnitska – not only the more obvious Diorissimo, but also Eau Sauvage and Diorella via the herbal and aquatic notes -- which ties in neatly with Parfums de Nicolaï’s identity as a “heritage” brand. That heritage was claimed from the outset, with the tie to the Guerlain dynasty still featured on each box; it is bolstered by the role Patricia de Nicolaï has taken on at the Osmothèque and more significantly, by her exploration of classic motifs such as the heliotrope of Kiss Me Tender or the violets of Violets in Love. It is the confident way of a perfumer who has always followed her own counsel and cares deeply about her art: Patricia de Nicolaï’s perfumes are, ultimately, a reflection of their author’s character.
[i] The formula of the new Week-end à Deauville is fairly different from the limited edition’s. I don’t have the latter at hand to compare directly, but the spices seem to have been toned down, the floral and fruity notes amped up. the coriander, rose and geranium have been removed to create a softer effect, PdN tells me.
Illustration by Claude Monet, Camille sur la plage à Trouville
Posted by carmencanada /Grain de Musc at 12:00