Cartier de Lune: "The Life of Flowers at Night" 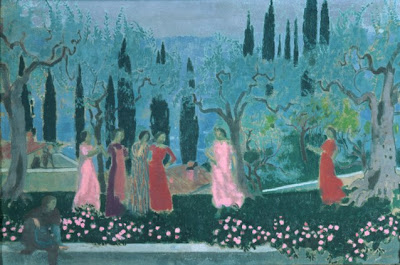 Cartier de Lune, the brand’s first mainstream feminine launch since it hired Mathilde Laurent, draws its name from “quartier de lune”, the crescent moon. It is also the first in a collection to which one new fragrance will be added every second year called “Cartier Libre”, this time a pun on the French expression “quartier libre”, which means getting some free time within a series of scheduled activities. Hence the youthful fresh floral theme.
Mathilde describes Cartier de Lune as “the life of flowers at night” – the humble cyclamen, scabiosa, pansies, freesia and anemones growing in “the garden that inspired my calling as a perfumer”, adding she had already captured another aspect of this garden in Guerlain Herba Fresca.
Cartier de Lune is indeed a pretty and unpretentious exercise, though it is a bit more complex than appears at first sniff and keeps yielding little details as it unfolds: a touch of green wateriness from the peony-like cyclamen; a sprinkle of warm pepper; the slightest lick of honey. The pink pepper and juniper throws cool glints – the moonlight in the garden – on a rosy clean, white floral accord with muguet and magnolia effects; there is something of the soft white density of a classic soap underlying the airier textures; the moonbeam is riding on a cloud of musk.
It’s interesting to compare L’Heure Diaphane to Cartier de Lune because it demonstrates how differently the floral theme is treated according to its destination.  The Heures de Parfum needed a straight-up floral to balance out the collection. Otherwise, Diaphane's limpid rose-peony-litchi accord might have done just as well in the register Cartier de Lune plays on. What topples the latter over into mainstream codes is its volume: for all its apparent lightness, it’s soapier, muskier, louder, with quite a powerful sillage and above-average tenacity. I soaked a blotter in it yesterday morning and it's still wafting quite strongly without devolving into a generic musk and wood base. Clearly, this Proustian young-girl-in-bloom has to be able to make herself heard in the olfactory din of department stores… In a side-by-side, the Diaphane has the delicacy of dragonfly wings while Cartier de Lune comes off as more of a tiny, relentless dragon.
Granted, Cartier is a player on the mainstream market and while the house has shown refreshing fearlessness in putting out the likes of Les Heures, it does need to offer accessible products to support its more artistic endeavours. Still, it is a pity that rather than going for a style that’s already well-represented in the aisles, the brand hasn’t leveraged Mathilde Laurent’s unique skills and imagination to introduce original forms, as it did with her Roadster or Jean-Claude Ellena’s landmark Déclaration. The perfumer who could make even the cheerful berries and citrus take on a fascinating complexity in L’Heure Folle and L’Heure Brillante was certainly up to the task.
Cartier de Lune is charming and quite likely to draw in the very public it is aimed at. I’m sure it’ll find fans in the perfume-loving community: after all, there are days when you just want a cheerful, simple floral.  But I’m no young girl in bloom, and I’ll be spritzing myself with L’Heure Fougueuse, at least what’s left of my decant. It’s one of the best things, if not the best, that Mathilde has done so far, and Cartier has all my gratitude for allowing it to reach my nose.
Illustration: Le Soir Florentin by Maurice Denis (1907)
Posted by carmencanada /Grain de Musc at 23:19