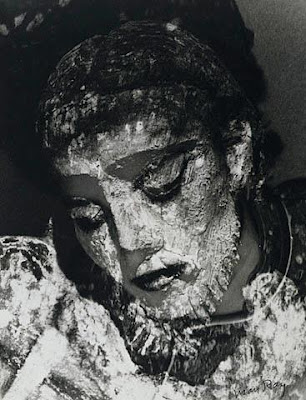 Since the inception of my virtual perfume life, few fragrances can actually bring back vivid memories: so many have succeeded themselves on my skin that unless something emotionally striking happens just when I’m wearing one, the Proustian effect has been disrupted. But there is one perfume that still has the flashback potential, because I bought it very early on in my online forays: in fact, it must have been the first I got because of the blogs.
Lubin Idole came into my life riding on a wind of words, its very perception altered by the stories developed around it. Alongside enthusiastic reviews of the scent by Bois de Jasmin
and Perfume-Smellin’ Things, Légerdenez initiated a debate on the un-reflexive post-colonialist aesthetics of the bottle designed by Serge Mansau, an early and rare instance of placing the presentation of a scent within a social and political context.
Of course, much of the buzz in the then-nascent online perfume community was owed to the author of Idole, Olivia Giacobetti, one of its stars from the outset: at the time, with cult products such as Premier Figuier, Passage d’Enfer and Dzing! for L’Artisan Parfumeur and her own Iunx brand, one of the first houses created by a perfumer, Giacobetti probably had the highest profile in the blogosphere. Since then, she has moved to New York and pulled a semi-Garbo: the only fragrances she’s signed recently are the two series for Honoré des Prés (by the way, the Dans l’Atelier de Cézanne candle she composed for the French artist Vincent Beaurin that I mentioned in my winter top ten will soon be available at Luckyscent, Vincent’s wife Sonia tells me). So Giacobetti’s name has been pushed back in the headlines, just as my bottle of Idole was quickly pushed to the back of the shelf by the mounting influx of new products.
But there was another reason for Idole’s exile. When I got it, I had just embarked on what would prove to be the most ill-advised relationship in my life. At the time, I had been touched by the Brit’s comment that Idole smelled like a kissed should taste. Though booze wasn’t what made the relationship so disastrous, his comment may have reflected more on his previous booze-fuelled romantic experiences that on the scent itself…
It was thus with some misgivings that I retrieved my bottle of Idole from the shelf to spray it on. Thankfully, I’d moved on to other fragrances by the time things with the Brit went sour, so Idole didn’t.
Though at the time Idole had shifted the predominant view on Giacobetti as a master of airy, ethereal fragrances, now it falls neatly into place within her corpus. The rum, combustible pepper and clove, caramelized sugar-cane notes, and smoky leather and sandalwood base speak of the fire that transforms aromatic materials into immaterial smoke, and Giacobetti, especially in her Iunx line, is indeed the perfumer of the immaterial, which gives a spiritual quality to some of her compositions. Rum itself is, literally, an ethereal note in the technical vocabulary of perfumery. But the sequence that links rum to wood by throwing saffron and bitter orange into the fire also ties Idole in with the spicy-balsamic gourmand register explored by Giacobetti in Safran Troublant, then more widely in her Iunx candles and now-discontinued body line, and lately in her rum-splashed Vamp à NY. In fact, Vamp à NY and Idole would be ideal his’n’hers fragrances: layering them, either through a skin-to-skin operation or a more traditional double-spritz, heats up the tuberose and fleshes out the woody-spicy smoke while the two scents bind through their common sweetness…
My tastes didn’t evolve towards woody, spicy scents, and I’m not sure Idole will become a standard in my rotation – I’ll probably douse it with a good dose of the Vamp to give it a dose of va-va-va-voom, or heat up the Vamp another notch. But I’m happy to note that Idole itself is just as good as I thought it when I first got it.
And now on to you. I’m sure you’ve been asked this question before, but have you recently revisited the first scent you bought because of the blogs? And how did that turn out?
Illustration: Juliet in Mud Mask, by Man Ray
Posted by carmencanada /Grain de Musc at 14:07