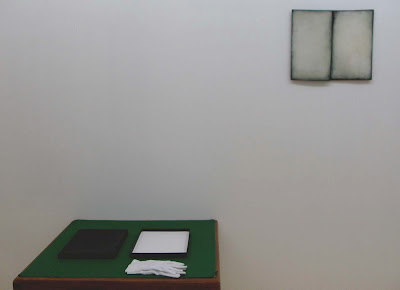 “I’m here on the rue Mazarine and there’s no Arnaud Lefebvre Gallery at number 30, what’s up?”
I’m at the level of n°60 myself and check my emails for the address while quickening my pace to meet my friend, the artist Rachel Laurent. I invited her to the presentation of the two new Turtle Vetivers at a Parisian art gallery. She fell in love at first sniff – literally blurting out “This is it!” when I made her smell my bottle of Turtle Vetiver Exercise One – and I want her to meet Isabelle Doyen. That’s really the whole point of Michael Shamberg’s project, Turtle Salon, “an open and chaotic network of diverse but interconnecting ideas, people, projects, events, and venues” bringing together “an international coterie of artists, writers, filmmakers, actors, musicians, dancers, architects... people, inviting proposals for readings, rantings, artworks, texts, performances and screenings.”
Isabelle has enjoyed meeting several people involved in Turtle as they pass through Paris and come to smell Turtle Vetiver in her lab, turning it into a node in the Turtle network. I’ve been looking forward to introducing Rachel and Isabelle to each other, especially since Rachel and her husband, the writer Guy Scarpetta, are the initiators and soul of another informal network of artists and writers dubbed “The School of Malaucène” after the small town in the Vaucluse where we gather every second or third year for an exhibition, series of talks and film festival around a chosen theme, in what is basically a three-day party in Guy and Rachel’s house...
The three criteria for belonging to the School of Malaucène are 1/ To be a truly original artist; 2/ To be very good company and 3/ To be able to hold your liquor. I don’t know whether Isabelle complies with criterion n°3, but she certainly fulfills the two first and I would love to draw her into the School with a piece for our 2012 event: she is one of the few perfumers I know who can art-direct herself and her work for LesNez is truly cutting-edge.
I bump into Rachel right in front of a small gallery which turns out to be the one we’re looking for, since I can see Isabelle’s diminutive silhouette through the window…As I’d expected, Rachel and Isabelle hit it off immediately.
Isabelle explains the concept of the Turtle Vetiver series. She picked vetiver because it is almost a perfume in itself, and in Exercise One, she barely dressed it up.
“I was always obsessed with Borges”, she adds. “In one of his stories, he describes a walk in an imaginary country on a never-ending street. People walk by buildings that all seem to be of the same color. But when they turn around, they realize that in fact, they are in a scale of colors so subtly different that you can’t see them change as you’re going by. You only see they are of different shades when you turn around.”
That’s the idea for the Turtle Vetiver series: progressive tweaks to the formula, which might end up not being a vetiver at all some day…
The two new exercises are called “Front” and “Back”. Neither is a work on vetiver as a soli-note, drawing out one or the other of its various facets.
Vetiver Front comes off smokier than Exercise One at the outset though it is quite close: Isabelle has added a material she’s very fond of, Evernyl (one of the molecules of oak moss) and an animalic musk, which ties in with a faint coconut note, but the main twist here is a mineral newspaper/carbon paper effect.
Vetiver Back comes off as sweeter – the ionones jump out at first sniff. “It’s more civilized than the first one”, Isabelle explains. “I’ve worked on the idea of the smell of skin, of delicate flesh.” Her upcoming mimosa for Annick Goutal inspired her to add mimosa absolute to the coconut and musk. The vetiver still speaks out loud and clear, but in a less raw tone than either Exercise One or Vetiver Front.
As Arnaud Lefebvre prepares the room for a screening of Chris Marker’s La Jetée, I talk with a young Berlin-based artist who tells me about meeting René Schifferle in Zurich where he had an exhibition: he recognized Turtle Vetiver, which Michael Shamberg wears, in an interesting twist on perfume as generator of community…
Meanwhile, Rachel decides she’s buying both the new Turtles as soon as they’re on sale on the LesNez website, which should be late February or early March. Which bodes well for those of you who missed out on the first series or whose Exercise One bottles are running low.
I’ll be back with full reviews as soon as I get the chance to test the two new scents.
Image: Arnaud Lefebvre Gallery, Paris.
Posted by carmencanada /Grain de Musc at 14:47