Noses profiled in the kitchen... and beyond: La Cuisine des Nez 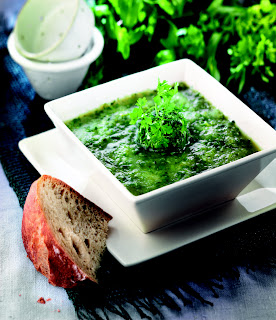 This is going to be one of those times when you really hate not reading French, because a truly excellent book on that elusive breed, perfumers working for the Big 5, is coming out in France on November 15th.
La Cuisine des Nez is sold as a recipe book – and recipes chosen by 26 top perfumers, plus an artistic director and an evaluator, at that – but it goes way beyond the kitchen. In fact, the gorgeously photographed cuisine is almost a pretext to get to know the noses better. Seasoned beauty industry journalist Sabine Chabbert, formerly of Cosmetics News and currently the chief editor of Beyond Beauty Mag has thrown 25 years’ experience into the pot to whip up in-depth profiles of her “chefs”. The result is a series of bios stuffed with insider information and anecdotes, and a real feel for her subjects’ personalities, as well as a very thorough overview of the profession – Sabbine feels that too often, perfumers are presented as artists isolated in their lofty ivory towers, whereas, as she says, they’re part of the staff of a composition house, work with teams, get in at 9 AM and leave at 7 PM like any other working stiff. For all the poetry of the job, it’s also a career, with its successes and limitations, and that comes out between the lines, perhaps more so than in any other perfume book I’ve read. For instance, we learn that most perfumers have done an often frustrating stint in the American perfume industry; that several started off working on production sites, where they learned about raw materials through direct contact with tons of the stuff… That Maurice Roucel forewent a five-pack, five-whiskies-a-day habit in 1986 by taking up the triathlon – he almost went pro –, got his start in the business by setting up the chromatography lab for Chanel where he got all his training, and took up cooking at the ripe old age of 58 because he was sick of eating in restaurants (his “Momelette” is a two-hour kitchen marathon). We learn that Françoise Caron and Olivier Cresp, who are brother and sister, never talk shop at family reunions, have never seen each other’s formulas, and consider their styles to be radically different – while Olivier of Angel and Light Blue fame is a perfectionist, Françoise, who authored the classic Eau d’Orange Verte for Hermès, calls herself an “imperfectionist” who wants “everything to be good straight away” (they offer their “Fettucine al Crespo” as a variant of the Alfredo). We learn that Jean-Claude Ellena offered a tea composition he’d been working on by himself to Dior for the future Fahrenheit: they turned it down. Bulgari bought it as is, and L’Eau Parfumée au Thé Vert went on to launch a thousand imitations, and we got two classics instead of one as a result (he and his daughter Céline offer a “Filet mignon de porc en croûte” in a recipe clearly and amusingly penned by Céline.)
On browsing the recipes, I’ve been wondering whether they reflect in any way their author’s perfume composition styles and tastes for specific aromas, in which case they would shed an interesting light… I must say this line of investigation hasn’t been entirely conclusive: perfumers don’t really have to be any more consistent than us mere mortals, do they?
The book is completed by an extra 46 aromatic recipes… None of which I’ve tried yet, because, as you would expect, this isn’t cooking 101: these guys are French, and they’re gourmets.
Meanwhile, to give you an advance taste, here’s the table of contents:
Carlos Benaïm, Artichoke salad with bitter orange
Anne Flipo, Pilgrim’s soup
Jacques Cavallier, Courgettes stuffed “à la grassoise”
Nathalie Feitshauer, Three salads, colors and flavors
Francis Kurkdjian, Golden cheese triangles
Olivier Polge, Smoked tea scallops
Antoine Lie, Seared goose foie gras, orange blossom mousseline and pastis salad
Thierry Wasser and Jean-Paul Guerlain, Crawfish Poularde
Nathalie Gracia-Cetto, Saffron and chick-pea chicken
Nathalie Lorson, Eggplant gratin
Maurice Roucel, the “Momomelette”
Michel Almairac, Croustade of veal with green olives
Françoise Caron and Olivier Cresp, Fettucine “al Crespo”
François Demachy, Stuffed cabbage “à la grassoise”
Jean-Claude and Céline Ellena, Pork filet mignon en croûte
Jean-Michel Duriez, Gingerbread and saffron cod fillet and mini-vegetables with orange blossom water
Christine Nagel and Benoist Lapouza, Zarzuela
Antoine and Shyamala Maisondieu, Red curry
Sophie Labbé, Jeanne and Louise’s chocolate cake
Patricia de Nicolaï, Berry tiramisu
Pierre Aulas, Almond and apricot cake
Luc Berriet, Gingerbread with orange peels
Now tell me: who would you like to have dinner most, based on those dishes? Drop a comment and I’ll do a draw: the winner will get a photocopy of the recipe he/she picked. It’s not quite dinner en tête-à-tête with a famous nose, but it’s a whiff…
Illustration: Anne Flipo's Pilgrim's Soup, photographed by Jean-Marc Anglès
Posted by carmencanada /Grain de Musc at 12:30