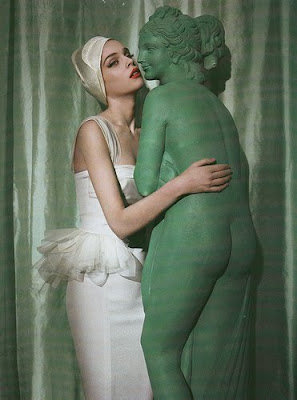 The first time I smelled orange blossom, it was in the arms of a boy in Seville during the processions of the Holy Week. It had another name then for me, bequeathed by the Moors to the Spanish language: azahar. Standing under those trees still heavy with oranges, studded with fragrant white stars against dark waxy foliage, was one of the most head-turning olfactory experiences of my life. Of course, Román, he of the chocolate eyes and flamenco hips, might’ve had something to do with that too… And so I couldn’t think of a lovelier, more thrillingly evocative scent for Easter time than Penhaligon’s new Orange Blossom, and that’s what I plan to drench myself with instead of flying down to Seville as I did so many times in the past…

The 10th instalment of the Anthology collection confirms Penhaligon’s bid to infuse a more contemporary style of perfumery into its heritage, with a deliciously old-fashioned – indeed, multi-secular – theme, reworked by Bertrand Duchaufour from top to bottom. Who knew Mr. D.’s headlong rush into lush florals would shed light on such an unexpected facet of his talent, and that he had it in him to thrive in such a sensuous register? (Well, clearly, Penhaligon’s knew, or at least they had a hunch. Watch this space for his answer in a few weeks, for the launch of Nuit de Tubéreuse, the next L’Artisan Parfumeur…)

Orange blossom absolute is vegetal, mineral and animal all at once. It betrays facets of the flower that are usually kept well hidden under its tiny white skirts -- a dark green tip of asparagus, a whiff of hot tar just before a storm, a fatty smear of wax, a dusting of honeyed pollen… Bertrand Duchaufour has studied it, stripping its layers away and reassembling them as he did the vanilla pod for L’Artisan Parfumeur’s Havana Vanille, as though it were a material never encountered before.

The result is not as complex as last fall’s Amaranthine: Orange Blossom is a soliflore, a vertical structure that says “orange blossom” from top to base notes. Yet its seamless construction is exemplary of Duchaufour’s increasing mastery of his materials.

The fragrance is built like an olfactory fugue, each stage picking up on the notes unveiled in the preceding one. The sparkling opening buzzes with zesty notes and the orange-flavoured baby aspirin smell of petitgrain; the snapped green bean/asparagus facet of petitgrain is stretched out with violet leaf, which presents a similar facet. Cardamom absolute echoes both the zest and the green of the top notes in a warmer tone, while the anisic flavour of pink bay adds another, different nuance of green to the palette. The warm/cool interplay of the two spices work here in a similar way to aldehydes, to bring a vibrant, bubbly quality to the fragrance, churning the sparkling top notes into the headier heart.

The scent segues into its main accord through further green facets of rose, tuberose and jasmine sambac: these floral notes flesh out the orange blossom core, a blend of absolute and Aurantiol (itself a base combining methyl anthranylate, the main odorant molecule of orange blossom, and hydroxycitronellal, a lily-of-the-valley-smelling material). At this stage, Orange Blossom plays on soapy green notes set against a narcotic bouquet – an expansive, green-gold, pollen-dusted sillage of muguet, jasmine and honeysuckle deepened by tarry whiffs of indole.

As Orange Blossom reaches its drydown, it is the honeyed/waxy, almost resinous aspect of the absolute that takes over, with a vanilla, musk and sandalwood base drenched in balsamic, slightly oily “solar notes” – in other words, benzyl salicylate, the ingredient once used as a filter in European tanning lotions and which has become a signifier of “beach” to Continental noses… This tropical kiss, warmed with a touch of clove, lingers on the skin for hours.

Though it doesn’t go quite as far up the frills as Amaranthine, touted by Penhaligon’s as the “smell of a woman’s thigh”, Orange Blossom does manage to insinuate a few racier innuendoes behind its playful, spring-like smile. After all, the crown worn by brides since ancient China as a symbol of innocence can’t help but hint at the earthier proceedings of the wedding night…

And now… Ask me how do I feel from this chemistry lesson I’m learning?

Or if I were a season, I’d surely be spring,

Oh, hell, you might as well listen to the whole song. My favourite version of If I were a Bell is, fittingly, by the Betty Boop of Bop, Blossom Dearie. Click here. For Easter bells, it’s just the thing.

Orange Blossom will be on sale in the last week of March.