Beyond the Yuck/Yum Stage: My Perfume Primer Course at the London College of Fashion 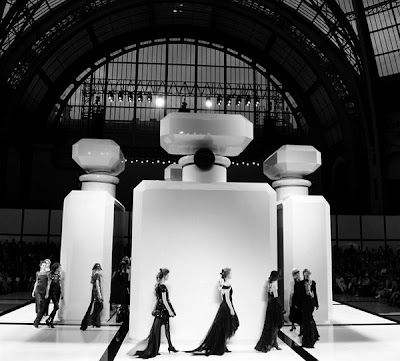 The cute, sullen little blonde recoiled from the scent strip. What was it I handed out? Aldehyde C-14? Mimosa absolute? Anethol?

I was into the third hour of teaching a “Perfume and fashion” intensive course at the London College of Fashion to a dozen 20-year-old girls, most of them American. Unsurprisingly, the discovery of raw materials elicited strong responses – swooning, repulsion, dismay…

I’d chosen to do the first day on the vocabulary of perfumery: the verbal words and the smell-words, i.e. the most common raw materials, both synthetic and natural, approached through different types of exercises.

In one of those exercises, I handed out a multiple-choice questionnaire so that the students could tick the facets they picked up. Only one choice out of five was misleading. Still, the power of suggestion was so strong that some people actually perceived, say, “bread” in aldehyde C-11. Predictably, bergamot instantly elicited a unanimous “tea”: they all drank Earl Grey, and their brains added on the tea note.

Teaching such absolute beginners brought home the sheer difficulty of initiating people to perfume, especially young people. First of all, because very few of them actually pay enough attention to smells to go beyond the “yum/yuck” reaction. I’d sent an email to the students asking them to prepare for the course by choosing one favorite smell to say a couple of words about – could’ve been anything: her dog’s paws, her mum’s apple pie, a flower growing in the garden… I got very little beyond “beach”, “clean laundry” and “citrus”, except for the Indian girl who said “mud”, but then the Indians seem to have much more of an olfactory culture.

Even when you try to keep it very simple, how can you make people perceive the hay, tobacco or horse in narcissus absolute, when those smells are simply not in their olfactory library? When I redid some of my exercises with the friends I was staying with in London or another friend’s dinner guests, they either sussed out the facets themselves, teased out some I hadn’t perceived or instantly got it as soon as I said the word, as though “hay” or “horse” or “damp earth” had materialized in front of them. I’d had that experience in my previous London course, one that was open to the general public: the older attendees, who weren’t necessarily hard-core perfume lovers, were the ones who seemed to have access to the widest range of olfactory references to draw from, which makes sense.

I started out the second day by decreeing I didn’t want to hear another “yuck” or “I hate that”: this was about learning. When you study fashion history or consider a collection, you have to go beyond “hey, I’d wear that” or “I’d never be caught dead in this”: same thing went for perfume, I told them as I went on to present twelve classics from Après l’Ondée to Opium, explored in their cultural, sartorial and social context… I followed up by a study of the modernization of Chanel N°5 into Eau Première (a huge hit with the students) to draw a parallel between Karl Lagerfeld’s and Jacques Polge’s respective rewriting of the Chanel codes – and to show how mainstream can be done right. After that, a deconstruction of a contemporary scent, Havana Vanille, with five of the actual raw materials used in it. Finally, I asked the students to pick one of the five Heures de Parfum by Cartier and write a couple of lines about it, then listen to Mathilde Laurent’s presentation of them to check if their impressions coincided with her intention. Actually, they often did. One student went as far as outline the character of a woman wearing XII – L’Heure Mystérieuse, the incense-patchouli-jasmine sambac-castoreum one, saying for instance that this was a woman who made dessert, but for herself…

For all the frustrations of frog-marching my young ladies through dozens of smells and compositions without giving them enough time to assimilate – this is the limitation of an intensive course, especially when it bears on such an underexploited field -- those first few steps into olfactory discovery were gratifying to watch. For instance, the vanilla-haters in the group were blown away by the vanilla absolute used in Havana Vanille (although to my utter dismay, no one got vanilla from Shalimar extrait). Everyone seemed to pick up the shy nostalgic vibe of violet, the aloofness of iris or the cheerful, easy-going friendliness of berries: smells really do have specific emotional tonalities, it seems. It was, as usual, a delight to see faces light up as the students started accessing their olfactory intelligence. I hope I’ll have made a little bit of a difference in their perception of scents. And who knows, some day I might see one of those names on a bottle… Just hope it’s not a fruity floral.

Thank you to all my students for surviving this olfactory marathon and for being so sweet!

And for a student's-eye (or should I say nose) view... The Drooling isn't pretty blog reports. Thanks E., I'm flattered!
Posted by carmencanada /Grain de Musc at 13:31