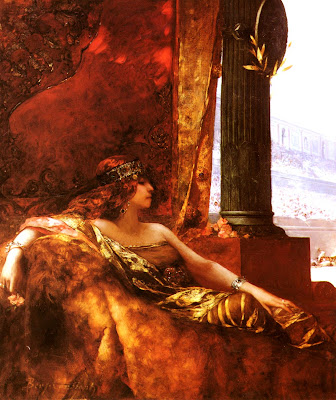 Tease out and blow up L’Heure Bleue’s full, almondy notes, tone down the orange blossom and heliotropin, hold the spices and you’ve got Guerlain’s next installment in the L’Art et la Matière collection: Tonka Impériale by Thierry Wasser, to be launched on February 1st 2010. Along with Bois d’Arménie, I find it to be the best of the line, and quite an encouraging sign for Thierry Wasser’s upcoming, less mainstream Guerlain compositions.

Like Wasser’s Iris Ganache and Olivier Polge’s Cuir Beluga (both from L’Art et la Matière), this is a gourmand with restraint, as creamy rich as the finest French chocolat filled with a Tonka bean ganache, yet laced with a hint of the trademark Jacques Guerlain aromatic herbs – in this case, rosemary – to man up the composition.

With its almond, tobacco/honey, balsamic and hay facets, Tonka bean absolute is practically a perfume in itself. In Tonka Impériale, the warm balsamic effect predominates, boosted by vanilla; its caramelized, almost roasted effects give the fragrance a chocolate-like richness without the actual flavor of chocolate. In a word, this is a Guerlain in the grand tradition of the patisserie, its cloyingness kept in check by the sheer feeling of quality: no empty calories here, just I-could-lick-my-arm-raw sensuousness. A gourmand for people who, like me, don’t like to smear themselves with olfactory dessert, and much subtler than, say, its boozy-sweet big sister Spiritueuse Double Vanille, namely because Tonka bean is a little less common as a dessert note… It’s also got considerable radiance and tenacity, so if you try it out on skin, don’t plan for other tests: a couple of spritzes will swallow up any other perfumes, and probably quite a few credit cards.

But don’t complain if you get bitten while wearing it: just bite back.