Picking Perfume in the Morning When You Own 300 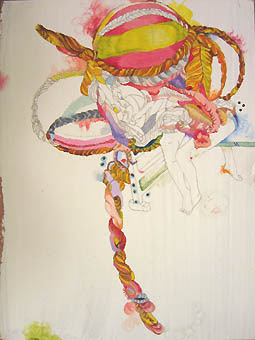 Sorry for not updating this week. I’ve been working overtime at my day job and spending nights and weekends preparing my London perfume intensive. I’ve also been in the mood to wear my darlings rather than test the new stuff – my top ten, but also The Different Company’s Jasmin de Nuit, which turns out to be a pretty good fit for fall, and Cartier’s L’Heure Mystérieuse, which is reconciling me with patchouli.

So before resuming my reviews, I’ll launch the following subject – regularly discussed on blogs and forums, but always worth having a go at:

How do you choose your perfume in the morning?

As for myself, I’d answer “mood” like most people, but that wouldn’t be quite accurate. Of course, mood is part of the picture: so are weather, occupations for the day and new darlings.

Say, for instance, I’m going straight from work to a social event: I can’t go back home to shower and change, so the pick of the day will be the pick of the evening. That leaves out a lot of the headier stuff.

Say that in addition, there’ll be a man (or two) that I’m interested in at that event. I’ll want something that makes me feel seductive yet it can’t be too come-hither – scrap the big white florals, then.

Or say I know I’ll be seeing a man who’s interested, but I’m not sure I am (yet): again, my subliminal message (to myself as well as him) needs to be a little tamer than if I were going in for a kill.

But mostly, I think I choose my perfumes exactly like I pick the books I read: through association. Say I’m reading The Decline and Fall of the Roman Empire; it’ll make me think of Rome, which might drive me to Yourcenar’s The Memoirs of Hadrien and from there on to Graves’ I Claudius.

Same goes for perfume: the smokiness in Cartier’s La Treizième Heure might steer me towards Chanel Sycomore, which might in turn lead me to spray on Hermès Vetiver Tonka, whose nuttiness might inspire me to pull out my sample of L’Artisan Méchant Loup.

The patchouli in Cartier’s L’Heure Mystérieuse will drive me to pull out Serge Lutens Bornéo 1834, then test out Parfums de Nicolaï’s new Patchouli pour Homme, whose lavender might incline me towards Jicky; but the rose-patch combo could make me want to re-try Francis K.’s Lumière Noire pour Femme; the dark rose in that one will make me think of Frédéric Malle Une Rose…

It’s the perfume week as fugue.

Now tell me how you do it?