A Few Additional Comments on Perfume as an Art Form 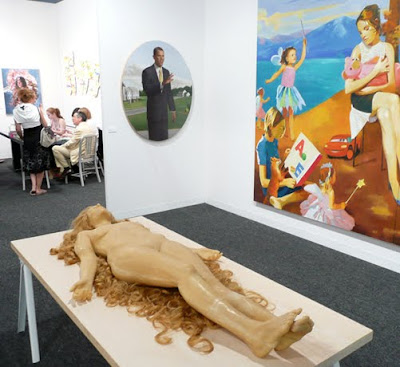 With London Frieze right behind us and the Paris FIAC opening tomorrow, I’ve been discussing perfumery with the artist, curator and critic friends who are converging on the city. Hence these scattered considerations, triggered in great part by Octavian Coifan’s recent posts, on viewing perfume as art:

Perfume is often denied artistic status because unlike a painting, a musical composition or a film, it is a product designed to be worn, like clothing: hence it could only pretend to the status of applied art. (Yves Saint Laurent used to say this, about couture: “It’s not an art, but it takes an artist to do it”.)

Granted, much of perfumery is indeed an applied art, “un art d’agrément” as we would say in French – “an art of pleasure” – whose meaning goes no further than to be pleasing: but then, the same goes for an overwhelming number of paintings, musical compositions and films. Does that deter us from considering those fields as art?

And granted, perfume is meant to be worn, like clothing. But clothing actually has at least three functional uses: to protect the body from the elements, to conform to a given culture’s standards of decency, and to mark social status. To which a fourth, relatively more recent function could be added: the expression of personality.

Perfume doesn’t fulfill the two first functions. It could be argued that two of its historical, practical uses – to ward off the noxious miasma thought to carry diseases, and to cover up personal or external stench – still persist in current usage, if only subconsciously (although today, to some people, perfume is thought to cause disease). But it can’t really be said that it has the practical use (protection, decency) of clothing. Perfume is purely ornamental and essentially useless – which is, of course, why the perfume industry is so mortally afraid of negative campaigning on the alleged noxiousness of its materials. Its very use is a conspicuous waste of money, since, unlike clothing, it cannot be cleaned, mended and worn until it falls apart.

Of course, this ornamental function as a social status marker or as an expression of personality is far from sufficient to qualify it as art: if it were, a Vuitton bag or a snakeskin jacket would also qualify.

Let’s take another approach. Suppose that, say, Mitsouko or Féminité du Bois, acknowledged masterpieces of perfumery, are indeed considered as artistic achievements: the work of a single creative mind, Jacques Guerlain’s, in the case of Mitsouko, of three minds (Serge Lutens, Pierre Bourdon and Christopher Sheldrake) in the case of Féminité du Bois. Both were groundbreaking in their time (even though, technically, Coty Chypre pre-dates it), templates from which entire families were derived, and both have a unique olfactory signature. Why should they not be granted the same status as, say, a Beethoven sonata or a Gershwin song? Could it be because they are produced industrially (and were meant to be from the outset)? Well, the sonata and the song are both reproducible in unlimited numbers, through recordings or printed scores. Ah yes, you say, but music has performers (the French word “interprète” lends another dimension, since it also means interpreter). And these performances add another layer of artistic achievement: you could even say that the sonata and the song don’t exist if they aren’t performed…

In this sense, the score would be to music what the formula is to perfume.

But who are the performers of perfume?

Perfume needs four things to exist, apart from the liquid in the bottle. A body to bear it. Air to carry it. Noses to perceive it. Brains to transform it (into impressions and language).

And this is where Octavian’s recent post on perfume as social art made the penny drop for me. In it, he refers to the curator, art critic and theoretician Nicolas Bourriaud’s 1998 Relational Aesthetics. In a very tiny nutshell, this theory applies to art in the age of the Internet: the main idea is that a “family” of contemporary artworks doesn’t posit the traditional dual relationship of the work with a single viewer; that because of its very structure (loosely, that of an “installation” or “performance”), it generates social relationships between its viewers, and that these social relationships are an intrinsic, essential part of the work. It isn’t complete without them; it goes on evolving as it generates interaction, discourse, use (for a slightly more detailed explanation of Relational Art, click here for the Wikipedia entry).

Now, Nicolas Bourriaud happens to be an old friend of mine. I’d lost touch with him during his tenure at the Tate Modern in London, and started my blogging in the interval. When I saw Nicolas again, I of course spoke about my efforts. He was extremely responsive and enthusiastic: to him, this was “an extension of the field of criticism”. I haven’t broached the subject of relational aesthetics as applied to perfume with him, but Octavian’s post seemed to make perfect sense.

Perfume does create social relationships and always has, if only on a subconscious level: it clearly impacts the way we present ourselves to the world and the way we are perceived by the people who smell our sillage.

But it goes further than that. Perfume has also created a set of vibrant social relationships, facilitated by broadband internet connections and online publishing media (forums and blogs). It has been re-appropriated and hijacked (again, the French word “détourner”, “to deviate from an intended destination”, is more fruitful) away from the owners of the discourse: perfumers, PR and marketing departments, beauty editors, professional journals. Beyond the way skin “chemistry” affects its development, every new review or comment transforms its perception, its definition and the story that surrounds it. Its very nature, either as the intransitive, immanent creation of a great mind or as a consumer product, has been irreversibly altered by the newly thriving perfume culture. The very argument that “perfume can’t be subjected to criticism because its perception is essentially subjective” is thereby defeated. Subjectivity is part of the process by which perfume is appropriated as a work of art, by which it generates community and accomplishes itself through this community’s discourse— through the unending virtual extension of its properties and of its effects.

By the way, this doesn’t contradict what I wrote in the previous post about the more objective criteria of perfume criticism: those criteria are as applicable to perfume as they would be to any creative endeavor, but they are just one element of the dynamics of the wider-ranging relational sphere of the perfume-loving community.

The topic of conversation is already found for my next dinner with Nicolas.