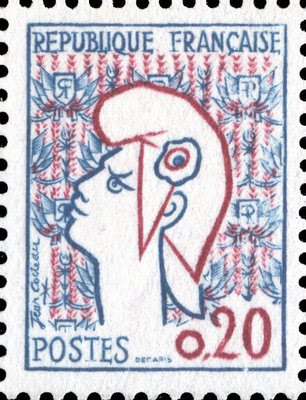 ... a day when I usually stay inside to avoid the crowds that inevitably converge towards the Champs de Mars right next door, and the firecrackers going off everywhere in the streets… And try to convince the cat that the fireworks rattling the window panes do not spell the end of the world.

To celebrate the French national day, you could of course wear just about any quintessentially French perfume, from Chanel N°5 (fronted by a Marianne, Catherine Deneuve) or Coco (another Marianne, Inès de la Fressange) to Guerlain Champs-Élysées (Sophie Marceau, who almost made it as a Marianne as well).

If you want to get historical about it, you could pick a fragrance composed in the heady wake of the Libération – though there were still keen food, housing and coal shortages, couture houses celebrated the Allied victory by a slew of new scents.

Marcel Rochas’ Femme was famously scraped together by Edmond Roudnitska using whatever was on hand during the Occupation, including, so the legend goes, vats of a synthetic that had been left lying around for years, which exhibited an attractive mulled plum note. Femme was launched through a subscription immediately after the Liberation: it marked a return to femininity that was to be expressed three years later in sartorial terms by Christian Dior’s New Look, after the tough war years.

Translated in less poetic terms, this would mean that women were sent back to the salons, boudoirs and kitchens after having taken on many responsibilities, and enjoyed a measure of sexual independence while their men were away, during the topsy-turvy years of the German Occupation. Nothing expresses this transition better than the olfactory chasm between Germaine Cellier’s hard-bitten, androgynous Bandit and her lyrical Coeur-Joie for Nina Ricci, a delicate, powdery aldehydic bouquet of violet, rose, jasmine and iris. The original heart-shaped Lalique flacons designed by Christian Bérard fetch fortunes at auctions but you can occasionally find round eau de toilette flacons at better prices. Or get the re-edited heart-shaped bottle of the extrait at the Nina Ricci boutique.

Other Liberation-era scents: Balmain’s Vent Vert, also by Germaine Cellier in somewhat more biting form, and Carven’s Ma Griffe. Both express the youthful, springtime energy of an era in which France hoped to brush aside (and actively worked to suppress) the murkier memories of defeat and subsequent collaboration with the Germans…

1989 marked the celebration of the Bicentennial of the taking of the Bastille, with a colorful, multinational parade orchestrated by advertising maestro Jean-Paul Goude, crowned by Jessye Norman singing the Marseillaise, draped in a giant French flag-dress designed by Azzedine Alaïa, at the place de la Concorde, where the guillotine once stood. Not too many 1989 scents bring up that extraordinary celebration – the only time I actually went out to the parade. Annick Goutal’s Gardénia Passion, which is really mostly a tuberose, does have a soaring, fireworks quality to its white floral burst. Was Etro’s Palais Jamais, also released in 1989, ironically named after the fact that the national palaces would never again be the property of the monarchy? I haven’t smelled it… you tell me. Jean Desprez put out a Révolution à Versailles that year: I’ve never smelled it either and it’s now discontinued.

If you want to get contrarian about it, you could pick Serge Lutens’ Un Lys, a gorgeously heady blend of lily and vanilla with a greenish tinge, in honor of the soon-to-fall French royal family, whose emblem was the fleur-de-lis.

My personal pick may be, also for contrarian reasons, Histoire de Parfums’ 1740, inspired by the Marquis de Sade, an author dear to my heart since I spent a few years writing my thesis on his work. The troublemaking D.A.F. de Sade had been imprisoned in the Bastille at the behest of his in-laws, who obtained a lettre de cachet from the king, which meant he was to remain there until his family saw fit to release him. On July 12th, Sade claims he started howling that the prisoners’ throats were being cut (there were eight inmates at the time, counting him). He was promptly transferred out of the Bastille, practically naked, and so lost his most precious manuscript, the 120 days of Sodom, despite his entreaties to his wife to go and fetch it. Which of course, the poor woman couldn’t, as she tarried a bit too long…

Histoires de Parfums 1740 is an odd leather and spice blend tugged between the sweet – vanilla and the chocolate facet of patchouli – and the savory – cumin, coriander, cardamom and immortelle. Though he enjoyed a bit of a whipping, both on the active and receiving end, the actual marquis de Sade was no leather fiend (leather fetishism, while certainly older, was only identified in the late 19th century) but he was definitely a foodie, and his letters to his wife are full of lists of foodstuffs he wants her to supply him with.

On the other hand, I might just as well wear L’Heure Bleue on the wrists, Dior’s Cologne Blanche in my hair (the almond and heliotropin will marry just fine) and red on my lips.

And what about you? Any suggestions for Bastille Day?