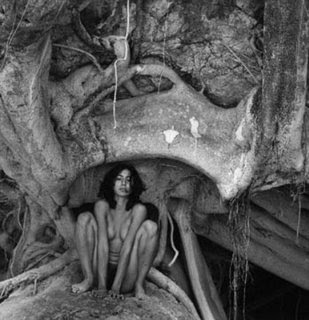 LesNez Manoumalia’s Polynesian inspiration is exotic, but not in the “I travelled to postcard-land to source the most precious essences” style of perfumery… Sandrine Videault did travel, but not to the far side of the planet, since she already lives there, from our point of view; the Pacific island of Wallis, part of the French overseas territory Wallis-et-Futuna, lies halfway between Tahiti and New Caledonia, where Videault was born and resides.

The perfumer based her composition on the Wallisian’s ancestral Tuitui, around a creamy, gardenia-like frangipani flower called the fagraea, Neo-Caledonian sandalwood and Java vetiver. But the natural feel of it, the way it opens up to you, its uncontrived grace, owes just as much to Videault’s talent and know-how as to her skills as an olfactory explorer.

Manoumalia belongs to the French tradition of perfumery despite its documentary origins, precisely because French perfumery does play its part in the very rituals of the Wallisians, who sometimes wash their hands in perfume, Videault explains in 1000fragrances, and tend to favor old-style chypres, amber and heady white flowers… In a word, people after my own heart. More than that: one of the oldest French fragrances, L.T. Piver’s 1907 Pompeïa, is actually included in the formula for Tuitui since the 1950s, Videault reveals in the Perfume Shrine. So that, to speak like the French Deconstructionists, the French culture always already contaminates the ritual practices of this far-flung island… Thus, a few drops of Pompeïa nest in the tropical heart of Manoumalia as a quote and a wink to the sly re-appropriation by the Wallisians of a culture which is theirs anyway: they are French, after all.

Have I already said how often I’ve been wearing Manoumalia, and how utterly, kiss-me-stupid beautiful it is? It is a lush, moist fragrance with the creamy texture of those tiny white flowers that exhale the most powerful scents, hidden under huge leaves. And like those flowers, it occupies space in the oddest way.

At a one-meter distance, you throw a sandalwood sillage. What you actually smell on your skin is a tuberose-intensity tropical flower with a lash of spice, coconut accents, the faintly mushroomy facet of gardenia and an underlying brown-sugar sweetness. But the weirdest thing is the disconcerting behavior of the vetiver: it seems to sneak up behind you, like a now-you-smell, now-you-don’t ghost hovering at the edge of consciousness. The first day I wore Manoumalia, I kept thinking of Bandit (which I bet the Wallisians love): something dark, green and bitter kept haunting me, only to dissolve when I pressed my nose to my wrist.

Manoumalia is a fragrance with a (true) story – tropicalia without the paper parasols in the fruit juice cocktails – but it leaves you enough space to slip in. It breathes. You escape.

To know more about Sandrine Videault, who deserves to be known, read her interview by Elisabeth de Feydeau (in French), by Octavian Coifan (also in French) and by Helg of The Perfume Shrine (in English).

Image: I was thinking of using Gauguin, and it’s probably a heresy to stack Flor Garduño’s somber, stately Mexicans over Sandrine Videault’s radiant ode to Wallis, but it seemed right, so there you go. I thought they should meet each other.