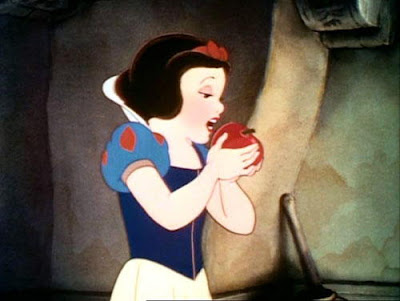 This story could start like a fairy tale. Once upon a time, a blogger went into Sephora to buy mascara, and was caught by a summer storm. As she walked along the aisles, perusing fragrances she never paid attention to because they seemed too common, too popular to her, her gaze was attracted by a candied-apple bottle. She held out her hand, sprayed her wrist as though in a trance, smelled… and her prejudices were swept away.

It could also start by some stats: of the five fragrances of the Poison franchise, the only sales that went up in 2007/2008 were those of Hypnotic Poison and Midnight Poison. For the latter, it makes sense: it’s just been launched, and lavishly, with a film by Wong Kar Wai. But the former is ten years old and it’s selling better all the time.

Why? Simply because it’s very good. And because it perfectly expresses, in its very composition – perhaps subconsciously – the concept of poison…

The fragrance of absolute risk

The launching of the first Poison in 1985 was a masterstroke. The bottle, the juice, the name, went one better than the then eight-year-old Opium. Dior hadn’t launched a feminine fragrance since Dioressence in 1979: for the first time, it broke with the tradition by not naming it after a variation on the name of Dior; ever since the resounding failure of Dior-Dior in 1976, Edmond Roudnitska was no longer the house’s perfumer.

The heavy-weight spicy floral – Luca Turin compares it to a tank – bore its name well, with a sillage that was nearly toxic in its intensity. Let’s face it: it may well be because of Poison and its ilk, from Giorgio Beverly Hills (1982) to Angel (1992) and Amarige (1995) that several organisations, establishment and even cities like Halifax, Canada, have clamoured for the prohibition of fragrance, accused of being literally toxic.

Not that Édouard Fléchier’s composition, chosen from 780 proposals according to Michael Edwards, wasn’t beautiful: but it displayed unheard-of aggressiveness in overdose. This was its designer Maurice Roger’s intention: an “absolute risk”, based on the concept of “love, seduction and death”.

The very shape of the bottle fitted the concept perfectly: for Roger, it had to be an apple. The apple of Eve, which precipitates humanity out of the garden of Eden and into mortality; the poisoned apple given to Snow White by her evil stepmother, which plunges her into a death-like sleep (and which, according to psychoanalyst Bruno Bettelheim, is the symbol of accession to an adult sexuality)…

Snow White’s apple in a bottle

Strangely, while researching Hypnotic Poison, I stumbled on a post by Scent Signals in which the author says that the fragrance sends her into a deep, peaceful sleep…

When she composed Hypnotic Poison, did Annick Ménardo think about the implications of the name? It is quite possible that she worked on a submission without knowing the client, but I’d like to think that she knew quite well what she was doing when she showcased the almond note. The fragrant almond, so milky in its vanilla bath, so embracing, so reminiscent of childhood sweets, marzipan and sweet almond oil (now we’re in Hansel and Gretel…).

Now, what is almond?

Extract the odorant principal of the bitter almond – that of the apricot or peach kernel or the apple seed – and you will obtain a substance called mandelonitrile or amygdalin. In water, this substance decomposes into benzaldehyde and… cyanide[1]. Which, as any reader of classic English murder mysteries knows, is recognizable because it smells of almonds.

Hypnotic Poison literally smells of poison disguised as a delicacy – it might not be by chance that its bottle is as red as Snow-White’s apple. Its pernicious nature is betrayed by the slight bitterness, underlined by a touch of anisic caraway, rising from the powdery cloud of heliotropin (L’Heure Bleue’s main note). The metallic tinge of the musky base (some synthetic musks have a metallic facet) adds to this vague impression of toxicity. Sambac jasmine (the type used to perfume Chinese tea) adds a raspy, caster sugar quality to the blend, while trailing a hint of corrupt-smelling indoles…

Many commentators (like Minette of Scent Signals and Victoria of Bois de Jasmin) have remarked on the embracing, comforting feel of Hypnotic Poison – which is exactly why it's so perverse. It lulls you to sleep while speaking to your subconscious.

Hypnotic Poison’s enduring success has, of course, been noticed by Dior, who is now planning the launch of a Hypnotic Poison Elixir in October or November 2008. However, Annick Ménardo’s formula will be tweaked by François Demachy, Jacques Polge’s former assistant at Chanel, and since charge of olfactory development for LVMH. An anise note will be added to the blend – which may remind one of another of Annick Ménardo’s gourmand best-sellers, laced with vanilla and heliotropin, launched a year before Hypnotic Poison, and also in an apple-shaped bottle…

Image: From Walt Disney’s Snow-White and the Seven Dwarves. As if you didn’t know.

[1] Actually, strictly speaking, the cyanide used in poisoning is potassium cyanide, KCN, whereas the product of the decomposition of mandelonitrile is hydrogen cyanide, HCN.