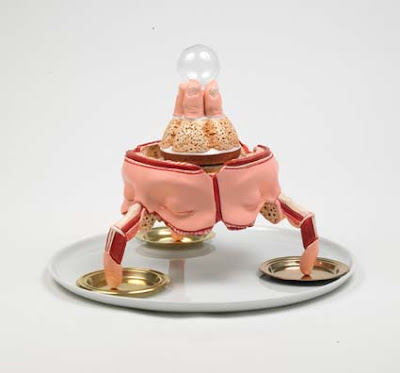 Is the size of a press release inversely proportional to what you can say about a fragrance? (Of course, darling, you know size doesn’t matter…).

It’s as though, instead of the expensive advertising that accompanies a major launch, Guerlain had decided to publish the film synopses.

I’ll spare you the prose: you can read its involuntary hilarious English translation at The Perfume Posse (March also brings up the language-blind infelicity of the use of the French word for “carnal” in English: “charnel” does indeed bring forth images of genocide and the Black Plague). Between “curves in the moonlight”, skin sprinkled with chocolate and peppercorns, and “the colour of blood that rushes to your cheeks”, let’s say that the aforementioned Jackie Collins won’t lose any sleep: the copywriters won’t be churning out best-sellers any time soon. Okay, just one, irresistible sentence: “He has had my body, but not the most secret part of me, my ELIXIR CHARNEL.” Next to that, By Kilian’s hyperboles (since then deleted from the site) sound like Samuel Beckett.

To imagine the chic and smiling Guerlain S.A.s repeating the stuff makes me blush, and not from modesty. By the way, that whirring noise you hear in the background is Jacques Guerlain spinning in his grave.

However, under this priapic prose, there are fragrances. What are they worth?

Let’s say that Guerlain, after Spiritueuse Double Vanille’s runaway success, has rushed along on the well-travelled path of the gourmand, at least for two of the three compositions. All are legible, fairly simple et quite charming – perhaps not enough to tackle the mailman for a savage kiss after the first spritz, or fluster your banker so badly he forgets that your overdraft is as provocative as your cleavage. You’ll need it: these cost about $240 for 75 ml.

Gourmand Coquin starts off with a milk-chocolate and caramel accord spiked with rhum which could raise anybody’s blood sugar, but not necessarily fire up hormones, unless your lover is on a diet. After a while, the sweetness recedes slightly into a darker, burnt, very Guerlain vanilla. The press release speaks of black peppercorns (yup, I always keep them by the bed just in case, don’t you?), but they’re not very perceptible.

Chypre Fatal conforms to the new rules of the genre: a rose-patchouli structure, slightly acidic green top notes, wrapped in a sweetish peach. Its soapy roundness is somewhat reminiscent of the discontinued Parure, without its dark oak moss background. The complexity of the great Mitsouko-type, lactonic chypre family is reduced to a hear-say: the depth of field is squashed, the image simplified. This is Keira Knigthley rather than Lauren Bacall.

Oriental Brûlant has the most Guerlain feel of the three, with its vanilla-amber-coumarin accord. But the “intensely animal quality” of styrax, promised by the press release, fails to make an appearance. If this is an animal, it’s a little pink marzipan piggy: almond soon takes over, dusted with a veil of crunchy confectioner’s sugar. Octavian of 1000fragrances compares this to Attrape-Coeur/Guet-Apens and to the defunct Cachet Jaune (which you can smell in the microwave ovens of the flagship store, with no re-edition in sight); according to him, it’s a tribute to the legendary Ambre 83 base. This is more obvious on the strip than on skin, where it turns into a less intense Hypnotic Poison. It is, to my taste, the more interesting of the three.