Of Olfactory Incivility (A Rant) 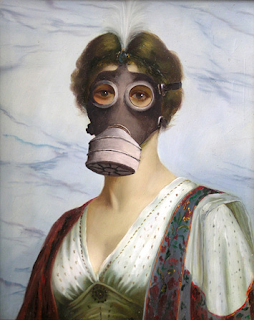 Perfumers are unanimous: their clients (the brands) keep asking for ever-more-potent fragrances. The fact is, perfume now has to compete with the punch packed by fabric softeners, now micro-encapsulated into textiles, releasing their scent over several hours (days, weeks…). And people want a bang for their buck.

When I complained about this trend, which turns any journey in public transportation into an olfactory cacophony, I was gently chided by a perfumer friend for looking down my nose on “popular tastes”. Perhaps I am. This doesn’t mean I’m wrong at being alarmed at this increasing loudness in fine fragrance. What does it say about our times?

These olfactory selfie-sticks expanding the radius of me-me-me bring to mind what the philosopher Slavoj Žižek branded “The Return of Public Vulgarity”.

“The problem here is what Georg Wilhelm Friedrich Hegel called Sittlichkeit: mores, the thick background of (unwritten) rules of social life, the thick and impenetrable ethical substance that tells us what we can and cannot do. These rules are disintegrating today.”

Foghorn scents are a symptom (admittedly benign) of this disintegration, an olfactory incivility. Because they’re soundless and invisible, their wearers are not aware they're being loutish, but wearing them springs from the same sense of entitlement as manspreading (aka "the crystal balls syndrome") or vociferating one’s life on the phone in a public place. And the taste for them speaks of blunted sensitivity – you need a fragrance to blare out the simplest possible message (Candy! Clean laundry!) before it can reach your brain.Call it locked caps for the nose.

But these atomic clouds of scent are also a bubble to retreat in, like the earbuds of an iPod – the difference being everyone is subjected to your nosy music.  In France, when you dislike someone you say “Je ne peux pas le sentir”, “I can’t smell him”. When your personal space feels infringed upon by strangers, by their not-me-smell, you push back: olfactory attack as a means of defense. Perhaps perfume is returning to one of its original apotropaic functions – a reminiscence of its use in years of plague to push back pestilence. But now, instead of camphor, rosemary or benzoin, we have praline, synthetic lavender or spiky woods. If perfume brands wanted to give ammo to the anti-perfume lobby, they couldn’t have found a better way.