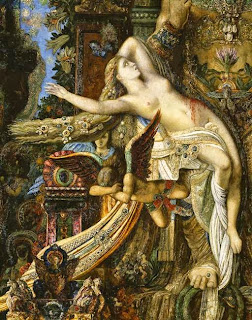 His depressing and erudite productions possessed a strange enchantment, an incantation that stirred one to the depths, just as do certain poems of Baudelaire, caused one to pause disconcerted, amazed, brooding on the spell of an art which leaped beyond the confines of painting, borrowing its most subtle effects from the art of writing, its most marvelous stokes from the art of Limosin, its most exquisite refinements from the art of the lapidary and the engraver.

J.K. Huysmans, Against the Grain

What possessed me to wear La Vierge de Fer last summer when I visited the Musée Gustave Moreau with C.H.? I wanted to take him to an atmospheric, lesser-known historical venue that wouldn’t be teeming with tourists. I thought I might as well give him a whiff of the latest Lutens. It turned out to an uncannily suitable choice.

The Symbolist painter, praised by Belle Époque aesthetes such as Huysmans’ Des Esseintes (the patron saint of perfumers) and his model, the Count Robert de Montesquiou, remodeled his house in 1895 in order to turn it into a museum. To get to the two top floors, high-ceilinged studios built to display his paintings, you must go through his private apartments or rather, the rooms as he rearranged them for posterity. In the rooms overlooking the small courtyard garden, Moreau arranged family memorabilia into a “sentimental museum”. The main one, formerly a living room, holds the furniture from his mother’s bedroom, which became his own after she passed away. It is flanked by a tiny boudoir, originally Moreau’s bedroom, where the painter put the furniture of Alexandrine Dureux, the former governess je called his “best and unique friend”, who may have been, but more likely was never his mistress over the course of their 25-year relationship.

It was odd that to get to the room of the author of Oedipus and the Sphinx, you had to walk through his mother’s, C.H. and I reflected. More troubling still was the contrast between the shrines built to the two sole women in his life – both chastely loved – and the works that loomed above them, obsessively centered on “the goddess of immortal Hysteria, of accursed Beauty”, in Huysmans’ words. Pallid, hieratic, poisonous femmes fatales “saturated with animal odors, steeped in balms, exuding incense and myrrh” (Huysmans again), each and every one of them a Tubéreuse criminelle…

As we scrutinized the paintings, C.H. and I took in whiffs of La Vierge de Fer. In the text he wrote for the scent, Serge Lutens references a very different museum, the Musée de l’Homme with its ethnographic collection, as well as the very antithesis of Moreau’s languid muses with their boneless Mannerist silhouettes and Byzantine eyes: Picasso’s Demoiselles d’Avignon, a “nose thumbed at Eros”, he explains. Yet Lutens’ “lily among the thorns” was somehow insinuating itself in Moreau’s paintings as C.H. and I started spotting lilies, or lily-like blossoms, on every second canvas. Moreau’s Fleur Mystique was actually a Madonna sprouting from a lily stem.

Under the blind gaze of Moreau’s idols, the Iron Virgin’s smooth, muted white floral notes took on the same disquieting quality as De Profundis. Their petals’ green edges hinted at the metallic flavor left on the tongue by a silver spoon – an effect partly conjured by aldehydes and indole. The underlying sweetness somehow added to its vaguely ominous tone rather than taming it. Its very restraint made it feel more unheimlich than Lutens’ more overtly man-eating flowers.

Would I have reacted differently to La Vierge de Fer if I hadn’t known its name, with its reminiscences of medieval torture instruments, female warrior saints and cold, baleful goddesses? If Lutens’ text fear and the “beautiful monsters” it begets? Obviously. But when the conception of a fragrance is controlled by its author, there’s no reason to set aside its non-olfactive elements as though they tainted our perception.

The decadent-surrealist backdrop provided by the Gustave Moreau museum just added another layer to La Vierge de Fer. Or was it the other way round? As though the fragrance had predicted the visit; dictated its mood; cut through time to connect Lutens and his Iron Maiden with the specters of the visionary recluse, his mother, his chaste muse and his beautiful female monsters. This was perfume-as-séance: a ghostly presence whispering of dreams or nightmares… 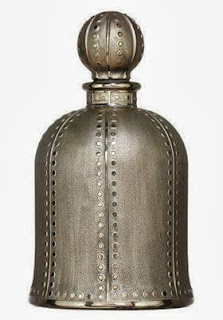