The French Ministry of Culture acknowledges perfumery as an art 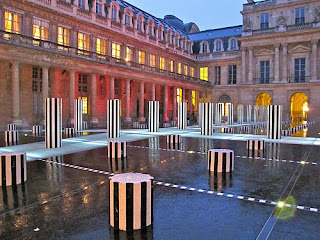 France has had a Ministry of Culture since 1959 – incidentally, just a spritz away from Serge Lutens’ boutique, since the Ministry is housed in the 18th-century Palais Royal.
Fashion, design, rock music, comics, the circus, were all brought into the cultural fold in the 80s. But it took another quarter of a century for the French Republic to acknowledge that perfume, too, was a form of art, and a major contribution to French culture.

Somehow, I’m not surprised that it was the current Minister Frédéric Mitterrand, a writer, filmmaker, television producer and talk-show host, who finally invited perfumers in. And not a moment too soon, thanks to the tireless efforts of the Société Française des Parfumeurs.

Yesterday afternoon, the order of “Chevalier des Arts et des Lettres”, a honorific title given to those who have illustrated themselves in the arts and letters, was bestowed to five seasoned perfumers, diplomatically selected to represent the Big Five: Daniela Andrier (Givaudan), Françoise Caron (Takasago), Olivier Cresp (Firmenich), Dominique Ropion (IFF) and Maurice Roucel (Symrise).

The Minister made a beautifully written, well-documented speech (kudos to his ghostwriter). The newly-minted “Chevaliers” each spoke a few words: Daniela Andrier defended creative freedom but admitted her mouth had gone dry; François Caron, with tears in her eyes, simply dedicated this honor to the memory of her recently deceased parents; her brother Olivier Cresp promised he’d go on surprising us; Dominique Ropion read a speech in which he swears he slipped a couple of spoonerisms, which he is renowned for making; Maurice Roucel was down-to-earth and droll, and took a moment to photograph the audience, the Minister and himself.

What will this ceremony change for the industry? Will the Ministry move at last to protect still-extant masterpieces of the past and grant them a status as national heritage, so that they can be exempted from regulations and restored to their former glory? Will the matter of authorship be addressed? Will there be funds and resources allocated to exhibitions, historical research, preservation of heritage and archives? Will the Osmothèque get more support so that it can at least open a branch in Paris?

For the moment, it is a symbolic gesture, but most perfumers I spoke with told me they were deeply moved, and hopeful. And also a little parched, since champagne ran out early. And peckish since the “canapés” were too weird to eat.  So guests trickled down to see the exhibition curated by Annick Le Guérer in the Ministry’s windows, which includes atomizers of historic scents reconstituted by the Osmothèque, such as Patou’s Moment Suprême or Rigaud’s Un Air Embaumé.

One of the first people I ran into as I was lining up to give my invitation was Michel Roudnitska. As Frédéric Mitterrand spoke, I watched him taking pictures – he is a photographer as much as he is a perfumer. And I couldn’t help thinking of his father, who fought long and hard for perfumery to be considered as an art.
Edmond Roudnitska, who the Minister called “the figure of the Commander” in an oblique reference to Mozart's Don Giovanni – never got an honorific decoration. But his spirit was surely hovering under the gilded moldings.