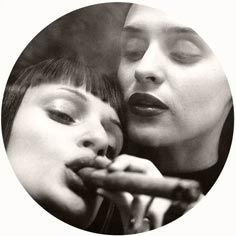 Vanilla-centric scents were never something I could get particularly worked up about. I may want to offer myself up at dessert when the mood strikes; I don’t want to smell of it. Which is why the vanilla-clastic compositions that surfaced last year (Vanille Galante, Felanilla and Havana Vanilla) delighted me by their off-kilter take on the pod. And Bertrand Duchaufour’s Havana Vanille delights me particularly because it reminds me of something I’d much rather wrap my lips around after dinner than a spoonful of vanilla ice cream…

If you’re going to build a scent around vanilla, Havana’s a logical place to go – especially if you’re working within a collection based on exotic olfactory journeys, in this case L’Artisan Parfumeur’s “Voyages” series. Apart from the geographical angle (vanilla planifolia is a Mesoamerican plant), “vanilla” and “Havana” echo each other both on the phonetic and olfactory levels. To put it plainly, the vanilla pod does have a tobacco – and thus, a Havana cigar – aspect. And that’s what Bertrand Duchaufour has chosen to underline, among other things, down to the slight vegetal mustiness of cured tobacco leaves.

The result is what he calls a “wickedly pod” vanilla, gustatory rather than gourmand, stretched out into its less familiar facets: leathery, animalic, smoky, woody/ambery and even medicinal notes.

Like Jean-Claude Ellena’s, his former colleague at Symrise, Bertrand Duchaufour’s compositions are not only impeccably intelligent perfumes, but a reflection on the art of perfumery – in this case, exploring vanilla as though it were a strange new material, and deducing its place on the scent-map. He builds his fragrance from materials that echo each other: each one is strictly necessary, and each one speaks, not only of the fragrance itself (to create its effect) but of what perfume can say and of the way it can say it. The structure of Bertrand Duchaufour's compositions is legible but paradoxically, it is this very legibility that makes them so mysterious.

In Havana Vanille, the actual vanilla acts as the core noun of a paradigm: its adjectives (animalic, ambery, balsamic, woody, spicy…) are picked up and amplified by the other materials, to form a second, decomposed and recomposed vanilla around the core; an olfactory illusion sheathing the real thing; a space in which the notes resonate, carried by musk. Havana Vanille is a perfume that breathes.

Though Havana Vanille’s rum cocktail opening could trick you into believing you’ve just bumped into a relative of Jean-Paul Guerlain’s boozy Spiritueuse Double Vanille, it morphs before you can mutter “been there, done that”. In fact, the shot of rum is so fleeting it acts more as a hook, a teasing allusion to the Cuban theme than a motif. But the rum – reinforced by orange and davana – does introduce vanilla through its woody/phenolic aspect (rum is aged in oak casks, hence its vanillic flavor). Blended with immortelle, it also conjures the amber and warm spices of the pod.

Then Havana Vanille gets down to the heart of the matter: vanilla and its tonka bean-immortelle-narcissus double.

The dominant, balsamic character of vanilla is reinforced by tonka bean and immortelle. Its animalic, tobacco/honey/hay facet is drawn out by both tonka bean and narcissus (LMR Narcisse d’Auvergne absolue, also used by Anne Flipo in L’Artisan’s Fleur de Narcisse 2006 and Mathilde Laurent’s La Treizième Heure). The material itself doesn’t smell much like the actual flower and Bertrand Duchaufour uses for its intrinsic qualities (its olfactory adjectives, as it were) rather than to represent narcissus. The narcissus absolute is what imparts the vegetal, freshly cured tobacco-leaf note that picks up on the green aspect of the vanilla pod.

This tightly-woven vanilla story is what plays out on skin and stays pretty close to it. The sillage, however, expands Havana Vanille into a huge, sensuous cocoon, both powdery and slightly resinous, which Bertrand Duchaufour calls “the dark side of the musk”. Try this experiment: wear the scent in a room for a while then leave it. When you come back, the trail you’ll have left won’t be quite what you smell on your skin. The musks – a blend of clean and dirty, with a bit more emphasis on the dirty – are what give the fragrance its volume, its movement, its follow-me-young-man wake.

Since he’s left Symrise to set up on his own as perfumer-in-residence at L’Artisan (he also works with other houses), Bertrand Duchaufour’s work has been getting more hands-on both in the literal (working at arm’s-length from his vials) and metaphorical sense: as though he were engaging more sensuously with his materials. His three latest compositions – L’Artisan’s Havana Vanille and Al Oudh as well as Penhaligon’s Amaranthine—venture into more skin-loving notes and have, as a result, become easier to inhabit for those of us who found some of his earlier work a little too challenging to truly embrace. Perhaps, at this point in his career, and with the recognition he’s getting – Bertrand Duchaufour is undeniably one of the best perfumers of his generation – he feels free enough to play around with outrightly carnal notes, whether ylang-ylang, cumin, civet… Or just plain vanilla, a cliché if there ever was one. He can afford to.

In fact, there’s one L’Artisan coming out this spring that’s frankly… intense. And I’ve been wearing it intensively when I’m not giving in to Havana Vanille.

Resistance is (or will be) futile. But for now, my lips are sealed.