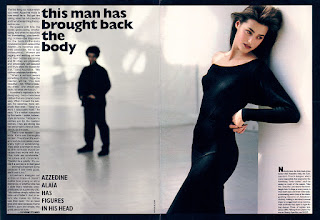 In the 80s there were two ways of dressing to show you had both brains and curves. Gaultier’s corsets were quotational and ironic, as tightly tied up in arch references as they were cinched around your waist. Alaïa’s stretchy dresses somehow redesigned your silhouette into Jessica Rabbit’s while allowing you to move; but the only story they told was the one you’d live out in them…

In the tradition of Madeleine Vionnet or Cristobal Balenciaga, Azzedine Alaïa works on form rather than narrative. Echoing this aesthetic stance, his first, long-awaited fragrance is strictly abstract, fiercely un-Oriental and based on the merest glimmer of an anecdote, more of a sensation, really: a childhood memory of his grandmother splashing cool water on hot walls in Tunisia.

During the monthly work sessions that brought together all the members of the creative team, the perfumer Marie Salamagne explains, Alaïa gave few specific indications. But he did know what he didn’t want. And one of the things he definitely didn’t want was for any note to stick out so that it could be identified. When describing her composition, Salamagne says she prefers to speak of sensations: the coolness of water, the velvet of petals, the warmth of skin. So: mineral, floral, animal.

Alaïa manages to be an oddity, fitting neither niche nor mainstream codes, while – even more oddly – feeling deeply familiar. It does smell of cool, mineral water and warm skin, but also of the wall and even of dust.

As for notes, if one must: the aquatic effect is rendered through Transluzone, a Firmenich molecule which, unlike calone, smells neither of melon nor of oysters and egg whites, but acts rather like aldehydes. Coolness: pink pepper. Certainly enough lemon to produce the same sensation on the tongue that you get when you squirt a couple of drops in a glass of water. The peony and freesia accords included by Salamagne to brighten up the blend add a velvety petal freshness tinged with fruit in a tropical sunset palette of orange and apricot. Warmth: a creamy powdery musk accord – among which Firmenich’s Exaltenone, said to be fairly animalic and close to Tonkin musk. The fatty-inky-mineral castoreum base picks up the mineral accord from the top notes, holding up the vertical axis of the scent. Another way of reading Alaïa, as did a perfumer standing next to me at an event, would be: blood-rose-castoreum.

I’ve often thought that if I didn’t wear my pre-80s fragrances more often, it was for the same reason I didn’t wear my vintage dresses much: no Lycra, which is to fabrics what musk is to fragrance. Alaïa-the-fragrance wears like Alaïa’s curve-enhancing dresses. Like his trademark perforated motifs, it lets the scent of skin seep through. It isn’t particularly gendered, yet it hints at sex -- a compliment-grabber that’ll unfailingly draw noses to necks. 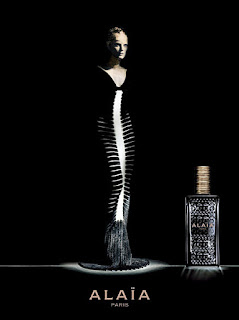 Alaïa will launch in France in Alaïa boutiques as of June 1st, then at the Galeries Lafayette in Paris on June 22nd. It will be globally available on July 6th.