Belle Haleine, the Scent of Art: Nosing around the Museum Tinguely in Basel 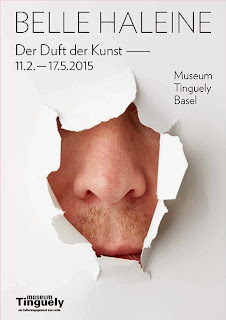 The scent of pink oleander, roses and hawthorn wafted from disheveled gardens, blending with wisps of barbecue smoke and cooler whiffs of river water that carried hints of waterlogged, decaying plants. On that muggy, hazy late-spring afternoon, Solitude-Promenade, the walk along the Rhine on the Right Bank of Basel, yielded a vibrant smellscape. And one that was, oddly enough, more vivid and memorable than most pieces I’d just experienced at the Museum Tinguely… Perhaps some of it was captured in Anna-Sabina Zürrer’s Solitude 2014, a glass vial containing 27 ml of essentials oils distilled from three cubic meters of plants from Solitude Park. Since the vial was locked inside a case, I’ll never know.

The first installment of a series of exhibitions dedicated to the five senses by the Museum Tinguely in Basel, Belle Haleine, The Scent of Art brought together works by modern and contemporary artists focusing on smell. It was, of course, named after Marcel Duchamp’s eponymous assisted ready-made (previously part of Yves Saint Laurent’s collection, its current owner remains anonymous, so that it was not shown).

When artists use smells, what smells do they use? To what end? How do they produce the smells – what substances do they emanate from? How is their long-lastingness, i.e. the integrity of the piece, ensured? And if there are many odorant pieces, how can they be shown together? When I poked my nose into Belle Haleine three days before it closed, it had been running for three months and the technical issues struck me first.

Scents leak. They mix and cross-contaminate. They “wear out” since to be experienced, they must self-destruct. The curator, Annja Müller-Alsbach, partly solved the contamination issue by placing most pieces behind closed doors. Which didn’t prevent Ernesto Neto’s monumental Mentre niente accade (“While Nothing Happens”) from taking over most of the airspace. The piece is a “tent” suspended from the ceiling, shaped like a gigantic upside-down mutant Casablanca lily and hung with spice-filled Lycra pouches. These colossal pistils/punching balls leak ground turmeric, black pepper, ginger and cloves, compelling visitors to experience smells from the point of view of the bee, as it were, in a full-body immersion. 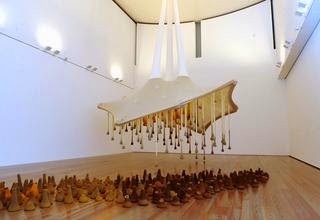 The smaller smelly pieces were shown behind Plexiglas windows equipped with a cylinder capped with a “sieve” (such as spice bottles have) which could be opened with a flap. However, snorting at an open can of Piero Manzoni’s infamous Merda d’artista (1961) was useless: whatever odorant molecules the 54-year-old turd might have given off, they’d long flown away. A blessing, no doubt. 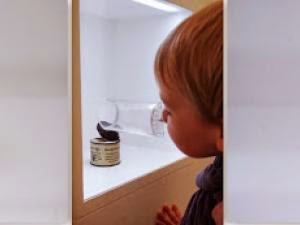 Not all pieces were smelly. Some – videos, drawings, paintings – contained no odorant materials at all. Others were meant to contain something smelly, but being sealed, you had to take the artist’s word for it: the seminal work in that category being Duchamp’s Air de Paris, an ampule containing 50cc of Parisian air. Except that the replica of the 1919 piece, produced under Duchamp’s direction in 1964, was made in Milan.

Whether you could actually smell them or not, the “smellies” could be split up into two categories. Those that either smelled, or were literally made up of human “byproducts”. And the rest (mostly plant-based). Within the former category, a number of pieces dealt with odor as identity. Among the things that couldn’t be sniffed, Peter de Cupere signed his Olfactory Art Manifest (to read it, click here) with an ink distilled from his body odors. For Concrete 2.3 g. Duft Selbstportrait, Claudia Vogel forewent washing for several weeks while wearing gauzes on various parts of her body, whose odorants were then extracted by a perfumer. 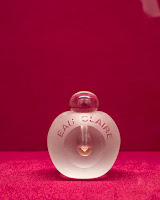 The result remains in a sealed bottle, as does Clara Ursitti’s Eau Claire, a blend of the artist’s vaginal and menstrual secretions, alcohol and coconut oil (produced in 1993, it precedes by nearly 20 years the designer Marc Atlan’s similarly-themed La Petite Mort, by Bertrand Duchaufour). Ursitti’s Self-portrait in Scent, Sketch n°2 was, however, made accessible through a clever Plexiglas blotter dispenser. The blotters must have been soaked well in advance. I think they were meant to smell of the artist’s nether regions, but they didn’t give off much more than a whiff of something faintly metallic.

!Achtung! Starker Geruch (“Beware! Strong odor!), warned a plaque at the entrance of the room where The FEAR of Smell – the Smell of FEAR was shown. The installation, by the Norwegian artist Sissel Tolaas, features the cold sweat of 11 phobic men, analyzed and reproduced by IFF via headspace technology and micro-encapsulated within the wall paint. To smell the fear, visitors must rub the walls in a giant game of scratch-and-sniff.

Three months into the exhibition, the 11 cold sweats had leaked from the walls to form what should have been a huge funk of fright, but to my nose, smelled as though someone had knocked over a shelf of aromatic ingredients in a perfumer’s lab while working on a generic male fragrance. When I leaned closer to the various parts of the walls, I picked up dill, the pissy-ness of cassis bud, cumin, musk and metallic notes… I was surprised to find that one “sweat-patch” smelled distinctly of fresh cilantro (at least three other visitors identified it unprompted while I was there). Another was reminiscent of buttered popcorn. 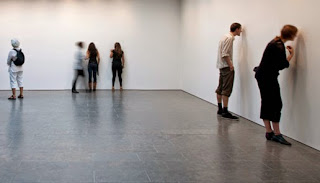 Museum employees told me they had witnessed strong reactions to Tolaas’ installation, but while I was inside, the general attitude was curious and thoughtful (Baslers are rather tolerant, level-headed people). Visitors seemed similarly unruffled by a piece that played on the invasive, invisible and potentially harmful nature of smells, Carsten Höller & François Roche’s Hypothèse de grue: a spectacular dragon-like structure belching steam purportedly laced with “pheromones” and “undeclared neurostimulatory substances”. 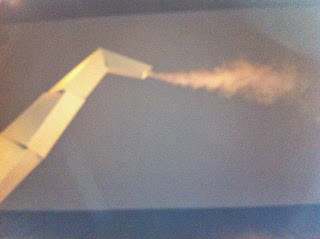 Reactions to Kristoffer Myskja’s Smoking Machine were somewhat stronger: as it name indicates, the apparatus chain-smokes cigarettes, so that the room where it was displayed smelled of ashtray (but not of smoke, smoking being forbidden within the museum – perhaps some kind soul wheels the machine outside every now and then for a puff?). The fact that the real “smell of fear” was given off by Smoking Machine tends to disprove the most commonly traded trope about fragrance: that reactions to it are purely “subjective” and “personal”. Few people would have reacted to the smell of cigarettes as though it were the very reek of the Antichrist during the Mad Men era – or even the 80s. The aversion is an acquired, cultural reflex.


Since the point was not to claim that “perfume is art” but to explore the use of scent in art, there were no perfumes per se in the exhibition, unless one counts the French Pop artist Martial Raysse’s 1970 Démocratie pour homme and Démocratie pour femme, packaged like commercial fragrances but meant to smell of “the people’s sweat”. 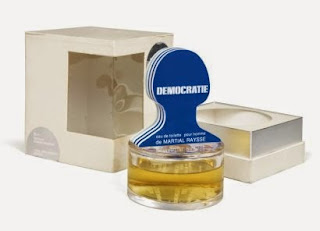 In fact, in a stance that hinted at some sort of reverse puritanism, most pieces selected for Belle Haleine gave off deliberately unpleasant odors. One rare exception was Valeska Soares’ Fainting Couch, a perforated stainless steel bed containing hidden Stargazer lilies: even so, the exhibition booklet warned us that “here, seduction and intoxication by means of odors lie closely side by side.” Poison, anyone? 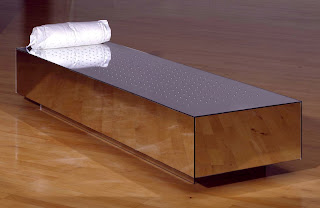 None of the artists represented worked on olfactory form – i.e. fashioning a shape out of smells. Even when the analysis and composition of scents was carried out by a perfumer, as in Ursitti’s self-portrait or Tolaas’s cold sweats, reproduction trumps aesthetics (at least in the artist’s intentions that were communicated to the public).[1] In the selected pieces, smell was used as an idea – for instance, the distillation of identity/essence through B.O. – and/or for its effect, leveraging the emotional, invasive, transgressive potential of odor.

Long exposed to the likes Sécrétions Magnifiques and used to discussing the finer nuances of human cumin or poopy musk, hardcore perfume aficionados may not quite be as shocked by this as “civilians”. Whether you’re an artist or a perfume lover, embracing skank is a way of pushing back one’s boundaries, sprinkled with a delightful dash of épater les bourgeois, never a bad point for the avant-gardes or the geeks. Odor is primal and penetrative; a love-hate medium that may elicit the strongest possible reactions (except, perhaps, with the neutral Swiss?). But does it have to stink to be art?

Belle Haleine, Der Duft der Kunst
Museum Tinguely (Basel) from February 11th to May17th 2015
[1] Frustratingly, there is no exhibition catalogue: the free booklet handed out to visitors does not cover all the pieces, and includes no other critical apparatus than a press article from the cultural supplement to the Swiss daily Die Zeit.