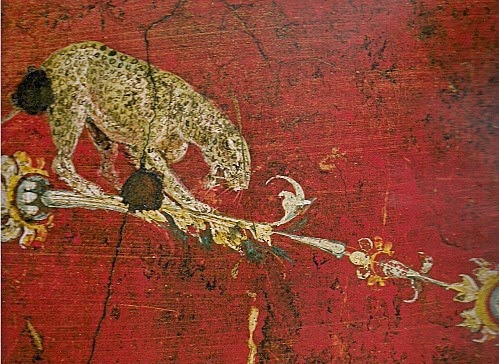 In his Studies in the Psychology of Sex, the pioneering sexologist Havelock Ellis remarked that “the special significance of musk” lies in the fact “that we here have a perfume, widely scattered throughout nature and often in an agreeable form, which is at the same time a very frequent personal odor in man.”

I chose the name Grain de Musc for this blog because this ambivalent ingredient linking our flesh to the natural realm is, in its animal form, the phantom of perfumery: the one material whose irreparable loss still haunts even perfumers who never worked with it. Muscs Kublaï Khan was a first attempt at conjuring it. Now two other fearless perfumers have invited the beast into their bottles.

Mathilde Laurent had already enticed a Tonkin musk base into La Panthère, where it lurked in the background. The new extrait version summons it out in the open: in the first, spectacularly feral whiff, the sleek killer pounces out in all its skanky glory. Though the beast calms down fairly swiftly after this frontal olfactory attack, the gardenia stays on red alert, bristling and turgid. The deliberately old-school musky growl brings out its heft and creamy chewiness. This is gutsy and sexy as hell.

Marc-Antoine Corticchiato has never been one to shy away from the feral either. The 2012 limited edition Musc Tonkin, a recreation of the eponymous ingredient, boosted the tiger-cage notes so fiercely an over-enthusiastic application called for smelling salts. The lower concentration of the new, more widely-available eau de parfum works a little more breathing space into the formula, the waxiness of rose and iris spreading a shimmering patina over the dark, funky blend of woods and balsams. But Musc Tonkin still holds the highest score on the skank-o-meter: it’s the closest a contemporary French perfume might come to an aphrodisiac potion with an inbuilt whiff of animal spirits…

Parfum d’Empire’s new La Chair des Dieux (“The Flesh of the Gods”) candle further sets the mood. Part of the La Quête des Dieux (“The Quest of the Gods”) trilogy, it is a burnable interpretation of Rochas Femme, if Femme had given itself over to an archaic Dionysian cult – a Maenad of a scent ablaze with spices over pungent woods. Light it up, and like the lusty gods of ancient Greece, watch yourself turning into something of an animal…