Jour d'Hermès by Jean-Claude Ellena: The hermeneutics of flowers 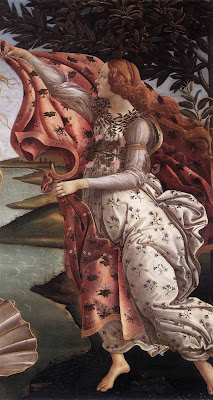 "I say: a flower! and, apart from the oblivion to which my voice relegates any contour, understood as something other than the known calyxes, musically there arises, idea itself and pleasant, the flower absent from all bouquets"

The French poet Stéphane Mallarmé, who wrote those lines, is said to be hermetic. And though Jean-Claude Ellena’s style veers more towards Apollonian clarity, Jour d’Hermès remains something of an enigma. No notes. No “known calyx”.

Jour d’Hermès is placed under the sign of dawn, which the French have two words for. Aube comes from “white”. Aurore was once thought to spring from the same origin as the Latin for “gold”. Homer’s rosy-fingered Eos, whose tears are morning dew, wears a saffron robe embroidered with flowers. Add a bit of green, and you’ve got enough colors to form a bouquet, stems overlapping to form a helix, propelling floral sprays into the air.

A sour splash of lemon on heady floral flesh: magnolia? Round green juiciness, like apple yet not apple… tip of the tongue… pear, the olfactory cousin of rose, offered up to our gnosis? (Gnōthi seautón, “know thyself”, read the inscription on Apollo’s temple in Delphi – but it’s so hard to know what our nose knows…). And so it goes: sweet pea, which is all at once orange blossom, rose and carnation? The delicate fruity greenness of gardenia, without the mushroomy rot. Something salty, definitely (ylang, lily, carnation?). A green, snapped-stem moistness that seems to be trending at the moment (it’s been obsessing me for months and I’ve smelled it in two other future launches). A tinge of orange-blossom soapiness. And then an underlying, sexy-skin softness – balsams, musk: Ellena can do sensuous – in fact, I suspect his famously concise style is his way of harnessing a tremendous appetite and curiosity (in his Diary of a Nose, he states he enjoys and enjoys playing with “indecent”, “disturbing” smells).

When he has obtained the scent he wants, Ellena will not alter the formula to make it more long-lasting, but he is entirely capable of creating a fragrance that unfurls on skin for hours. Thus, Jour d’Hermès is tenacious and strongly radiant (it garners spontaneous compliments), yet it is also stealthy, playfully – or perversely? – flying under the radar of identification...

When you speak of the fragrance of certain flowers with perfumers, they’ll often explain that once removed from its source and bottled, it would come off like an undefined bouquet. In this case, JCE has inverted the process like the finger of a glove, skirting perilously round the the mille-fleurs (a name once given to the mixed leftovers of various fragrances sold cheaply to poorer markets) to achieve a conundrum. As though he had created a hollowed-out form from which any flower could spring like a hologram, which turns out to be his very intention, according to the press material:


“I wanted to offer armfuls of flowers to smell, people could put in their own choice of flowers, smell what they wanted to smell.”

“I like to leave voids, ‘blanks’ in perfumes so that everyone can add their own imaginary world; they are ‘voids of appropriation’”, he explains in his Diary of a Nose (my translation).

Jour d’Hermès is therefore a matter of hermeneutics, to be interpreted like Pythian prophecies; but also, a perfume to be performed (in French, you say “interpret” to express this action).  What makes a perfume live is the fact that it is worn, rewritten by the wearer into her own story: the peculiar alchemy (Hermes Trismegistus) between skin, air and soul. In Jour d’Hermès, this performance/interpretation is literally written into the concept.

Jour d’Hermès will available in Hermès boutiques as of Saturday December 1st, and will launch in all other points of sale on February 15th 2013.

In order to take the “perfume performance”concept a step further, I will be drawing three samples of the scent: once the winners have had the opportunity of testing them, I’ll publish their interpretation.
The draw will be open until Friday December 7th. Just drop a comment, and I’ll announce the results of the draw on Monday December 10th.

Illustration: the goddess Flora in a detail from Botticelli's Birth of Venus.