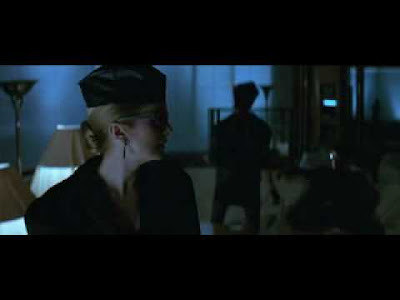 Remember that scene in Tony Scott’s The Hunger, where Catherine Deneuve, as a glamorous, bisexual vampire, goes up to the attic where she keeps her ex-lovers? She’s made them immortal, but not ageless, and their mummies in their variously decrepit states shuffle to her to beg for love… Well, that’s a bit what I feel when I walk by my various perfume stashes: they seem to be waving little blotters around, moaning “But you said you loved me…”
Usually, I’m too busy flitting from one new thing to another for testing purposes to stop and listen, but this time, trying to think back to the last time I was smitten by a new Chanel, I pulled out what I think could have been a house classic… this chypre resurrection is definitely the rediscovery of the season for me.

31 rue Cambon by Jacques Polge and Christopher Sheldrake for Chanel: A stunningly chic neo-chypre in which pepper acts as a vertical axis, from its hesperidic facets in the top notes in the role of bergamot (which has peppery facets) driving through the creamy peach-skin, jasmine and light ambery core all the way to patchouli (the same that was used in Coco Mademoiselle, here treated in overdose). This axis holds up the fragrance like the perfect cut of a suit which should, Mlle Chanel said, hang from the shoulders.

Still going strong in the rotation:

Anima Dulcis by Rodrigo Flores-Roux and Yann Vasnier for Arquiste: I know I’ve already listed this one in my summer top 10, and I’ve still to write the review along with a report of my conversation with Carlos Huber… I suspect I’m putting it off because I like it so much: once it’s reviewed, I’ll have to move on to other stuff. Let’s say it vies with Séville à l’aube and Guet-Apens/Attrape-coeur as my go-to oriental.

Bottega Veneta by Michel Almairac for Bottega Veneta: I’ve already said all the good I think of this mutant fruity-leather chypre, and it’s still prominent in my fall wardrobe as one of the best examples of what the mainstream can do right when a brand’s artistic director (Tomas Maier) knows how to choose.

Miss Me by Annick Menardo for Stella Cadente: Hard to get since Clarins terminated its licensing agreement with the designer Stanislassia Klein, this Menardo gem is a powerfully powdery oriental built around rose and balsams that must have one of the pioneers (in 2005) of the now-ubiquitous cosmetic scents. Still so well-loved in France fans will traipse to the Stella Cadente shop, or even the showroom, to nab a bottle, Miss Me will soon be sold on the brand’s website (it is available on Amazon).

New things that haunt me…

Mito by Vero Kern for Vero Profumo: Intensely hesperidic, green and white-floral, this chypre should rightly feature in spring favorites, but since it’s coming out this fall in most countries, I’m treating it as a jaunt in the Southern hemisphere. Since I’ve just reviewed it, I’ll add no more.

Perle de Mousse by Bertrand Duchaufour for Ann Gérard: I’ll be getting back to this for a full review, but briefly: I was immediately stunned by the mossy, iodic effects produced, without a drop of oakmoss, by the overdose of lentiscus (4%). A striking, gutsy and elegant neo-chypre I’ve been wearing a lot, along with Cuir de Nacre, previously launched in extrait form as Pleine Lune.

Volutes by Fabrice Pellegrin for Diptyque: Apart from chypres, a mainstay in autumn, tobacco has been trending as the new patchouli, and Volutes ticks all the right boxes, with iris as the new classic code for non-girly chic. I’ve very much enjoyed wearing Volutes and would turn to it when I don’t quite know what to spray on because it is fairly low-volume.

Féminité du Bois in the Vaporisateur Tout Noir by Serge Lutens: This isn’t a new fragrance but a 30 ml travel atomizer with seven facets, sold for the moment with either Ambre Sultan or Féminité du Bois refills, dressed in Lutens’s iconic black. The latter is a fall and winter mainstay in my scented wardrobe. There were some grumblings about the reformulation, which Lutens, much to his credit, addressed publicly. But I for one am grateful this classic still exists in a form which he feels is faithful enough to the original.

Speakeasy by Marc-Antoine Corticchiato for Frapin: This is the first time MAC has signed a fragrance outside Parfum d’Empire. In Speakeasy, the house of Frapin strays from cognac notes to a nostalgic blend of rum, leather and blond tobacco that’ll feel just right when the days get cooler. Again, I’ll be getting back to it with a full review soon.

Musc Tonkin by Marc-Antoine Corticchiato for Parfum d’Empire: This is another one I’ll be reviewing quite shortly (in fact this week): a feral, sexy tribute to Tonkin musk with honeyed and floral accents that’ll be giving Muscs Koublaï Khan a run for its money. It’ll be available in a limited-edition extrait form in November.
Alien “Les Parfums de Cuir” Limited Edition, Thierry Mugler: Cheating a bit here, because I’ve only given it one whirl on skin. But this 20th anniversary edition, macerating the juice with pieces of leather, sheds new light on Dominique Ropion and the late Laurent Bruyère’s masterful Cashmeran, Ambroxan and white flowers overdose. The leather brings a sort of a creepy dark mustiness that turns the sillage monster gothic. And the idea – tying in perfumery with its glove-making origins while quoting Mugler’s fetish material – is quite brilliant.