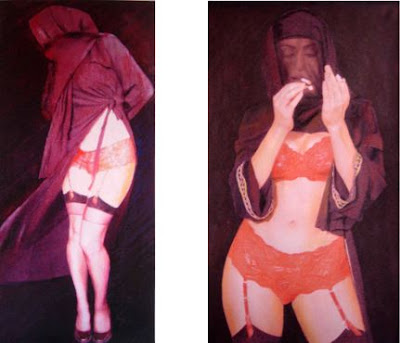 We may have to stop thinking of Bertrand Duchaufour exclusively as the master of the transparent woods lashed with spices and incense – I do, anyway. His three latest offerings don’t even feature that pinch of sliced green pepper I’ve come to see as his signature note.

No, Bertrand Duchaufour seems to have gone over to the dark side or at least lusher, dirtier notes. Havana Vanille, which I’m pretty sure is L’Artisan Parfumeur’s bid for the pod-loving American market, is built around a tinge-of-the-stable narcissus absolute. Penhaligon’s Amaranthine doesn’t shy away from what I was already calling “The corruption of white flowers” a year ago (a theme reprised by Penhaligon’s PR): that hint of vegetal decay at the heart of the purest blossom.

And L’Artisan’s new Al Oudh crosses over boldly into outright animalic funk, with a practically Lutensian level of cumin and enough civet to put the neighborhood toms in a state of alert. A generous helping of the ink-and-truffles castoreum pulls the leather accord, underlined with incense, into deep and dirty black. Sandalwood and myrrh add a subliminal tinge of sweat.

The oud itself is partnered with its classic Middle-eastern consort, rose; in another quote of Middle-eastern aromatic tradition, rose is matched with the difficult, medicinal-metallic saffron. In fact, every note, from honeyed date to fruity Atlas cedar, points to the Arabian roots of perfumery. After all, Al Oudh is, like Bois Farine, Timbuktu, Dzongkha and Havana Vanille, an episode of L’Artisan’s “Voyages” collection…

How does it measure up to By Kilian’s Pure Oud and Le Labo Oud 27? L’Artisan’s oud is quite a bit spicier and rounder than the former, and much tamer than the latter. If both sent you running for the scouring pad, Al Oudh might still be too much of an animal. If the cumin in Femme – which somehow Al Oudh brings to mind as a distant descendent – or Serge Lutens’ Santal de Mysore, El Attarine and Serge Noire conjures uncomfortable associations with hot days on the Cairo subway, give it a pass.

But if you love to roll around in animalic leather and spices, if a hint of pong sends a thrill through your spine, my how you’ll love Bertrand Duchaufour’s neo-oriental gem…

I love it when a guy plays dirty. And I’d gladly nuzzle a gentleman smelling of Al Oudh.


Image: from the Iranian artist Abelina Galustian's The Veil Series (2003), sourced from The Huffington Post.