Musk, the phantom of perfumery 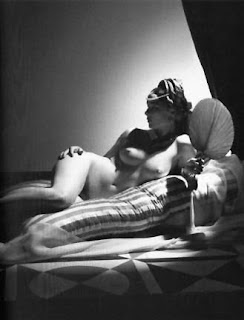 Yesterday, a scent strip fell from the pages of the notebook where I had slipped it.

Over a month ago, I had dipped it into a 40-year-old flacon of Chanel N°5. It still exhaled the suave and stubborn smell of musk. Natural musk, probably, along with one of the nitromusks discovered by a German chemist called Baur in 1888, while he was experimenting on explosives.

These compounds have now disappeared from perfumes. The former because of its rarity and to protect the species from which it was drawn: the musk deer were killed to extract their fragrant pouch. The latter because of its photosensitizing and potential neuro-toxic properties (cf Luca Turin in Perfumes: The Guide).

Nowadays, the effects of musk can only be experienced in vintage flacons. It makes the floral bouquet – iris, cassie, rose, jasmine, ylang-ylang – pop out from the old N°5, with a fluorescent intensity that develops on the skin within a few minutes. It is the animalic, slightly salty base, as sweet as a cat’s sweat between its paw cushions, of classic perfumery. Musk was so powerful that centuries ago, the Compagnie des Indes was forbidden to transport it on board ships loaded with tea: it would impregnate the precious leaves with its scent (cf Annick Le Guérer, Le Parfum).

Redolent with whiffs of faraway Asia and heated flesh, renowned for its qualities as a fixative and odour booster, musk is now the phantom note of perfumery.
This is why I chose to entitle this blog “Grain de Musc”, a grain of musk. Because it is haunted by the long-lost or overly face-lifted beauties of classic perfumery; and because these words are written in Paris. And, to paraphrase Voltaire, “Paris is the grain of musk that perfumes the universe.”