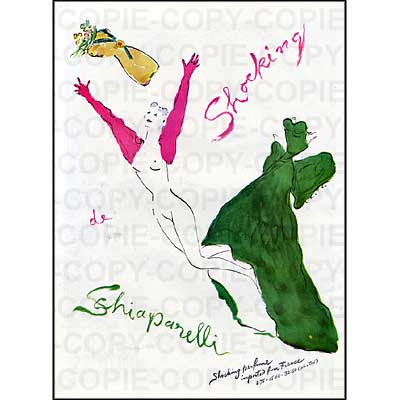 From this [Mae West’s hourglass] silhouette also arose the bottle of perfume shaped like a woman, that famous Schiaparelli perfume bottle that practically became the signature of the house. Eleonor Fini modeled it for me and the scent took more than a year to be ready. It remained for me to find a name for it and to choose in what colour it should be presented. The name had to begin with an “S”, this being one of my superstitions.

To find the name of a perfume is a very difficult problem because every word in the dictionary seems to be registered. The colour flashed in front of my eyes. Bright, impossible, impudent, becoming, life-giving, like all the light and the birds and the fish in the world put together, a colour of China and Peru but not of the West – a shocking colour, pure and undiluted. So I called the perfume “Shocking”.

When Elsa Schiaparelli launched her first fragrance in 1937, fashion was just veering away from the low-slung, tiny-breasted, skin-skimming silhouette of the 30s into a more tailored, broad-shouldered, nipped-waist style. “That Italian artist who made dresses”, as Gabrielle Chanel sneeringly called her, had introduced surrealism into couture by famously collaborating with Salvador Dali for some of her more outlandish models (lobster-adorned jackets, a shoe worn as a hat, another hat resembling a lamb cutlet, complete with frill…). The hot pink (“nigger pink” was her un-politically-correct expression) that shrouded the new scent expressed the indecent intensity of desire sung by her Surrealist friends. The scent itself, composed at the Roure Laboratories under the direction of, but not by, the great Jean Carles (Tabu, Ma Griffe, Miss Dior), was as flamboyantly immodest as its namesake pink. The perfume bottle expert Jean-Marie Martin-Hattemberg (as quoted by Richard Stamelman in Perfume: Joy, Obsession, Scandal, Sin) calls it “the first sex perfume”.

Imagine a lovely Parisian woman who has just spent a night in the arms of her lover. It is too late for her to go home and change, too late even to take a shower. She hurriedly splashes on a rose and lily-of-the-valley fragrance, even dabs a touch of it on her silk briefs.

When she finally comes home that evening, and slips off her silken lingerie… She smells of Shocking.

Because, yes, Shocking smells shockingly of gousset, that small triangle of fabric sewn into the petite culotte… The combination of ambergris, honey, civet, musk and sandalwood is possibly the closest evocation of the female bouquet ever devised by classic perfumery, barely veiled by the floral fig-leaf of a rose-muguet-gardenia heart. In its vintage version, it is astoundingly tenacious – still unfolding its vibrant beauty for over a month on a scent strip. On skin, its animalic intensity rises from the tiniest drop. One can only imagine the effluvia wafting up from Schiaparelli’s Place Vendôme salon, as the artist Christian “Bébé” Bérard “put scent on his beard until it trickled on to his torn shirt and the little dog in his arms”, or “Marie-Louise Bousquet, the witty hostess of one of the last Paris drawing-rooms [pulled] up her skirts and drenched her petticoats with it”, the designer recounts in her autobiography, aptly entitled Shocking Life.

Re-launched some time in the 70s in its trademark dressmaker dummy bottle, Shocking had become of late somewhat of a travesty of its former, flamboyant self. Roja Dove, who rightly considers it a classic, has recently had it restored to its full glory (along with another Schiap shocker, Zut) in a limited edition Baccarat numbered crystal bottle, available at his Haute Perfumerie shop at the top floor of Harrod’s. I haven’t smelled this precious re-edition, but I treasure the two bottles of extrait I found on fleabay (the flat rectangular bottles remain more accessible than the original “torso” presentation). Some evenings, nothing short of Shocking will do – whatever I chose to add to it is my very own business…