Are Fracas and Odeur 53 Brutalist? Of the use of artistic labels in perfumery... 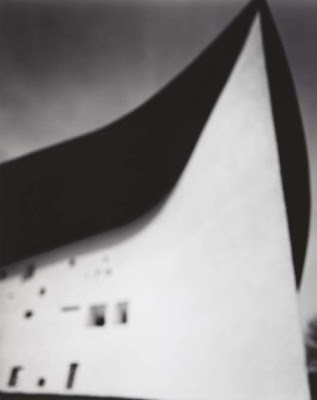 Chandler Burr gives excellent sound-bytes. On March 16th, the freshly minted curator of olfactory art at the New York Museum of Design spoke to the New York Times, where he was formerly (and famously, at least in our little world) a fragrance critic. How can you not pay attention when he dubs Edmond Roudnitska’s Diorama “one of the greatest Abstract Expressionist perfumes in the world”? Or Fracas “the first great Brutalist work of art” before going on to compare it to Comme des Garçons Odeur 53, “another Brutalist perfume”?
I’m all for setting the great perfumes of history alongside the major artistic currents of their time. There is no earthly reason why perfumers can’t be part of the zeitgeist, subject to the same influences as artists, composers or architects, and therefore able to express them through scent. But the exercise has got its limits, and unless you can do a parallel demonstration on olfactory and visual forms, slapping the label of an artistic movement on a perfume doesn’t go very far into shedding any light on it. Mea culpa: I was once upbraided by Jean-Claude Ellena for calling his work Minimalist, which in fact it isn’t in the strictly art-historical sense of the term…
So what is, exactly, an “Abstract Expressionist perfume”? Abstract Expressionism is really a grab-bag term: you can stuff Jackson Pollock and Willem de Kooning as well as Barnett Newman and Mark Rothko into it. The 1949 Diorama is definitely a contemporary of the movement; it’s undeniably abstract, but no more or less than practically every other perfume of the period, or indeed most perfumes up to the 70s. It’s expressive, certainly. But comparing the intensely sophisticated, full-fleshed Diorama to, say, Pollock’s drippings or de Kooning’s furiously clownish Women? Edmond Roudnitska’s ashes must be spinning in their urn.
As for Fracas, according to Mr. Burr, it is “Brutalist” in that “It uses a raw material that is extremely difficult to work with — tuberose. Tuberose has a quality of being one of the least floral florals in the entire world. There’s a huge menthol component to it, and menthol is very, very violent. What Germaine did was she took this violent thing and she created a structure around it.”
I suppose Mr. Burr said “menthol” in order not to frighten the journalist off with mentions of methyl salicylate. And Fracas’ outrageous femininity can be construed as “brutal”. But raw, as in “raw concrete”, the term which gave rise to the word Brutalism (from the French “béton brut”) it is not. The tuberose absolute is tamed and rounded out in Fracas by orange blossom, muguet and peach effects, among many other things: its raw edges aren’t showing as they do in, say, Annick Goutal’s Tubéreuse; they aren’t magnified as they are, famously, in the top notes of Tubéreuse Criminelle.
Brutalism was about exhibiting the functions of a building as well as the ruggedness and irregularity of the materials[1], as opposed to the smoothness and polish of the Modernist style, and you could make a case, as Mr. Burr does, for Comme des Garçons Odeur 53 displaying the synthetic character of perfumery materials in a way that brutally assaults certain noses. But the deliberate display of the true nature of a material and the play on the synthetic are not particularly characteristic of Brutalism (some of Le Corbusier’s buildings use no synthetic materials). If Odeur 53 is to be likened to any artistic movement, I’d say it is much closer to Conceptual art, an installation of non-organic, often impossible smells -- “oxygen, flash of metal, fire energy, washing drying in the wind, mineral carbon, sand dunes, nail polish, cellulose, pure air of the high mountains, ultimate fusion, burnt rubber, flaming rock.”
It does, as Mr. Burr explains, take fragrance “completely out of the natural”: one of the most transgressive gestures of the CdG line is Christian Astuguevieille’s displacement of the notes that can be used in perfumery; of what can be the subject of a perfume. The list of notes itself acts in the same way as a cartel in an exhibition: by adding a layer of meaning, warping facets of what may be common perfumery materials normally used to convey “natural” notes into also displaying their synthetic aspect; those fantasy notes, by being overtly impossible, fly in the face of the most common practice in the industry when it tries to fob off calone, say, as the ocean. But then again, at least half the listed notes in Odeur 53 refer to natural phenomena and this blending of “noble” and mundane notes is actually as subversive a gesture as ripping away the façade to unveil the synthetic nature of perfume.
It may well be that the term Brutalism can be applied to Fracas and Odeur 53, but as long as the argument is not supported you can easily slap other labels on, as I’ve just done.
Let’s put it down to editing the NYT interview into a manageable 900-word piece: I can’t imagine that Mr. Burr doesn’t have a reasonable knowledge and understanding of 20th century art history. It’s as though in his eagerness to fit perfume into the mandate of a museum of design, he’d just gone and used terms like “Abstract Expressionism” and “Brutalism” for their expressive rather than historic value, or to translate the language of perfumery into more familiar cultural currency – to give it distinction – for readers who wouldn’t otherwise understand why valuable exhibition space should be wasted on a futile commercial product.
Mr. Burr’s curatorial approach – showing the olfactory rather than the visual aspect of the art -- is laudable, remarkable and long-overdue. Is throwing around labels with careless abandon what it takes to sell the concept to institutions and to the public? He’s in a better position than I am to make that call. Whatever works, right?

P.S. Normand of The Perfume Chronicles has just sent me this link to the museum website. Thanks N.!
[1] "The qualities of that object may be summarized as follows : 1,Formal legibility of plan; 2, clear exhibition of structure, and, 3, valuation of materials for their inherent qualities
"as found"." (Reyner Banham, "The New Brutalism", The Architectural Review, n° 708, décembre 1955, p. 357)
Illustration: View of Le Corbusier's Notre-Dame de Ronchamp Chapel by  Hiroshi Sugimoto
Posted by carmencanada /Grain de Musc at 13:13