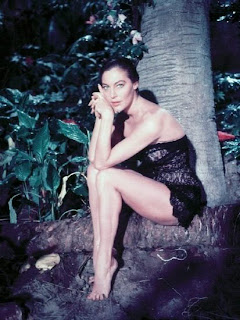 Perfumers use ylang like a joker in a game of cards, to bolster other floral notes:  if you’ll forgive the mixed metaphor, it usually features in ensemble cast fragrances but seldom nabs the starring role. Penhaligon Amaranthine, Ylang Vohibé by Parfumerie Générale, a clutch of Amarige flankers and Amber Ylang in Estée Lauder Private Collection just about rounded off the ylang-centric list until recently. Is it setting to compete with gardenia as a trending floral note? This spring, it’s been showcased in two new products, Diptyque Eau de Mohéli (which I have yet to smell) and Le Labo Ylang 49.

Of course, the fact that Le Labo would name a fragrance after the flower means strictly squat. Fabrice Penot and Édouard Roschi practically make a point of foiling expectations when they christen their launches. When I had the chance to finally meet them, we discussed the matter. I put forward my pet theory about niche naming fragrances after specific notes to make up for its lack of visuals and brand notoriety: customers can at least grasp at some form of mental image when you say “rose” or “vanilla”. And definitely, every time you wave a blotter at someone, they’ll either switch into full “pick out the notes” mode or sheepishly apologize for having “a bad nose”. Fabrice ascribed the behavior to Western “good student” formatting: we’re trained to try and come up with the “right” answer; to slot the unknown into familiar categories. Eddie added that by thwarting expectations, they meant to induce a moment of suspended judgment, where you could just take in the fragrance for what it was…

So: whether Le Labo Ylang 49 is really an ylang is a moot point. Despite being based on a tropical flower accord, ylang and what the press material calls Tahitian gardenia or pua noa noa (better known as tiaré) this is not a virtual-day-at-the-beach blend. If I had to locate it somewhere on the scent map, I’d peg it as an urban, sophisticated cousin of Sandrine Videault’s controversial Manoumalia, or perhaps the kid sister of Bertrand Duchaufour’s Perles de Mousse pulling a Gauguin.

Perfumer Frank Voekl (Firmenich) zeroed in not on the lush, suntan lotion facets of his exotic blooms but on their saltiness. Salty is a tricky effect to achieve in a scent, but you can get there with vetiver and the iodic facets of oak moss. And that’s what Voekl has done, tugging his vahinés into the underbrush to pull off their sarongs and slip them in chypre sheaths. Which sets them up for a sartorial accident: you can’t contain all that sultry flower flesh. Stitches and straps are due to pop. What rolls out is salty creaminess, picked up by benzoin and sandalwood in the base. I’ve always felt there’s a slight hint of fresh sweat in vetiver: in Ylang 49, it intensifies the heated crushed-petals-on-skin effect.

The press material mentions Glenn Gould’s rendition of the Well-Tempered Clavier, to say that “a floral composition can go beyond flowers, in the same way a Fugue in D minor is way beyond the D”.  They’d have had me with at the first mention of Gould; I’d add that an interesting perfume is the one which will to do its materials what Gould did to his: reinvent them. Ylang 49 does an excellent job of that. Not only does it cast ylang in a stunningly original light, but it also brings a different slant to olfactive wantonness. At least, that’s the effect it’s been having on Monsieur. 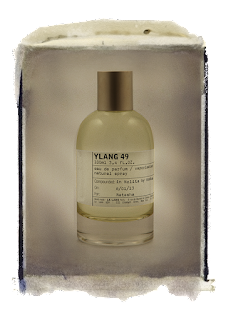 Illustration: Ava Gardner in a publicity still for Mark Robson's The Little Hut (1958)
Posted by carmencanada /Grain de Musc at 08:30