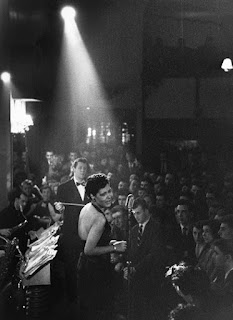 Every morning, Serge Lutens writes for a few hours. The story he wrote about Billie Holiday, his staff say, wasn’t initially intended to inspire a perfume. In fact, they add, it’s the first time he writes the story he will give out with a perfume before the perfume exists. It is also the first time he claims inspiration from a muse.

Billie, the short story given out at the press launch, doesn’t speak of perfume directly, though all the elements for a perfume are there in the story. Tobacco. Rum. Face powder. Gardenia. But it addresses its magical, transformative powers indirectly:

“Essentially, to objects not worn by those they were originally intended for, I bestow the power of transference or, perhaps, of metamorphosis. You are possessed.”

If Serge Lutens conjured the princess he became as a schoolchild studying the Middle-ages for Santal Majuscule, here it is Lady Day who possesses him:

“If I speak to you of Billie, it is certainly a roundabout way of speaking about myself. The “I” is hard for me. Don’t get me wrong, I am not with, but within Billie. [Translator's note: the French preposition "en" could also mean "in" as in "in disguise.]

As soon as her voice rose against a velvet drama, my heels rose. The cloth of a straight serge skirt hobbled my steps. The same suit squared my shoulders. With neither Job rolling paper nor tobacco, I held my cigarette high. As long as My man lasted, I became Billie or a chic client crossing through her song.”

Lutens, who started out as a visual artist, has been sliding from scent to words, and in this gradual morphing into a writer, his writing has become inseparable from his fragrances. The former will soon be made available to the public on the brand’s new website: a strange medium of publication for an author, but why not? Some of the more interesting experiments in fragrance today go beyond the purely olfactory into a cross-disciplinary approach: in this case, the fragrance-story diptych (triptych, if you include the compilation of Billie Holiday songs included in the press kit) is what Serge Lutens emits.

Is it somehow “cheating” to overlay Une Voix noire – the juice – with the beauty and pathos of Billie Holiday’s voice, of her legend? To enlist her ghost as Serge Lutens’s first avowed perfume muse? Is this substantially different from digitally conjuring Marilyn Monroe to tout Dior’s J’Adore in an ad campaign?

I’m sure the very idea of cheating would delight Serge Lutens. But if we are to believe his story – why not? It’s a good story – this goes further than just plucking the flower off the singer, since Lutens, in a Tiresias-like experience, claims to have been possessed by Billie Holiday each time he heard her sing… Billie is the story of how the flower found its way into her hair, singed of by a curling iron. Let’s not forget Lutens started out as a hairstylist – “Curling irons are not only able to play tricks on us, but also to make fun of those who are their victims.”

A gardenia bush watered with rum grows on his “Tombeau pour Billie Holiday”, narcotic and mushroom-tinged as gardenias are wont to be – this effects persists throughout the development – though not as decadently ripe as Tom Ford’s defunct Velvet Gardenia. In keeping with the story’s retro vibe, there is something of Fracas in Une Voix Noire (both scents, after all, are named after sounds), though the “black voice” sings its torch song a couple of octaves lower than Fracas’ hot pink coloratura, pulled down by a balsamic haze of rum and blond tobacco. But the power, the volume, the headiness are in the Fracas spectrum… I’ve always thought that if tuberose was a corruptress, gardenia was a corrupted flower, but Une Voix Noire almost makes Tubéreuse criminelle feel like a debutante, past the latter’s initial weirdness.

With Fracas, apart from the obvious white flowers, Une Voix Noire shares its strong muskiness and a sweet fruitiness that expresses itself in top notes that are almost strawberry-flavored, along with that characteristic “grape Kool-Aid” effect white florals naturally give off. A touch of burning rum darkens the sweetness out (an effect found in Olivia Giacobetti’s Vamp à NY for Honoré des Prés). On the scent-map, Une Voix Noire would also be in the same neighborhood as Calice Becker’s Sweet Redemption for By Kilian.

Those expecting a realistic gardenia soliflore will not find it in Lady Day’s dressing room: it’s just part of the story… Is the scent made better by that story? Like photographs, recorded voices – Edison initially conceived the phonograph to preserve the voices of loved ones – or flowers growing in the Garden of Good and Evil, perfumes may resurrect the dead.
But make no mistake: it is Serge Lutens who speaks through this "voix noire" -- not the voice of a Black woman, but the voice of black. The color of his mother's dress.

Since I received a full bell jar at the launch, I’m willing to share. Just drop a comment and I’ll draw decant.

Added October 2nd: The draw is now over. Thank you for your interest!